Posted in: Disc Reviews by Brent Lorentson on March 16th, 2015 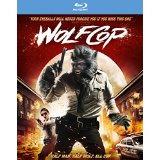 For your safety you should keep him away from the booze and doughnuts.”

Wolf Cop wasn’t a film haphazardly thrown together; instead its path to being made was epic in its own right as the filmmakers entered their concept into a Canadian online competition where people voted week after week on what potential film would be lucky enough to get made.  Wolf Cop slayed the competition, and as they say, the rest is history.  Now audiences around the globe can take in this campy, B-cinema darling from the comfort of their living room.  But is it all just a gimmick for a title, or is there more than meets the eye? Well, it’s a gimmick for sure; as for there being a story, it depends how hard you look.

I’m going to start off by saying if by reading the title Wolf Cop it was followed by the rolling of your eyes, there is a good chance this film isn’t for you.  Now if you see that title and you get a goofy grin and your mind starts racing with all the insane possibilities this could bring, this is the movie for you. This is a film that embraces 80’s schlock and simply just wants to have fun.

Every thirty-two years this quaint rural town celebrates an eclipse; along with the eclipse history shows the town also experiences some strange events as well.  With the eclipse only days away, Lou (Leo Fafard) is attacked by an unusual group of people.  When he wakes he notices something is a bit off, but considering he’s an alcoholic, he’s used to waking up and not remembering events from the previous night.  While the film doesn’t do much to create much of a backstory, the filmmakers are at least attempting to deliver a fun origin story.

As Lou continues to go through his transformations, it seems he becomes a better cop while transformed.  As for the transformations, despite being made on a small budget, the use of practical effects help make this film that much better.  Even though transformations are reminiscent of An American Werewolf in London, they still make an impact and are a nice reminder as to why prosthetics will always look better than a CGI cartoon creation.  While the look of the Wolf Cop very much has the look of the Michael J Fox version of Teen Wolf, it works for the tongue-in-cheek nature of the film.

It’s unfortunate we don’t get to see the Wolf Cop in action more, simply because it’s these moments where the film shines and works the best.  Every time we go back to Lou, it’s hard to believe he would ever care about what has been happening to him much less the town around him  Thankfully to fill these voids we have Tina (Amy Matysio), the town super cop, and Jessica (Sarah Lind), the sexy bartender, to keep the film moving forward.  Granted Jessica leads this film into some naughty territory when she at one point seduces the Wolf Cop, but it is done in such an over-the-top manner that you almost want to see how far they can go with this.

But who am I kidding? What people are going to watch this for is the final half of this film, which unfortunately clocks in under 80 minutes.  Crunched into that time we get everything from the Wolf Cop breaking up a robbery to him fighting off members of a cult who may or may not be human.  Heck, how can you not enjoy seeing a monster fighting crime that doesn’t get his fuel from blood, but instead liquor and doughnuts?

Sure, there are some issues with some of the performances, but that is to be expected when watching these kinds of campy horror films.  Where the performances are lacking, we at least are given some very polished visuals that have this film looking like a much bigger film than it really is.

This is a film that is simply fun to watch with a group of friends and have drinks while watching.  It’s a film that I do hope to see sequels from and hopefully with bigger budgets, because the world we get to see is already a hoot; now I just want to see more.

Wolf Cop is presented in a 1.78:1 aspect ratio. The 1080p image is arrived at with an AVC MPEG-4 codec at an average of 29 mbps.  When watching this film the one complaint I had was that the film had too much detail and seemed a bit over-lit for a horror film.  We see plenty of detail that went into the makeup effects, but by doing so a lot of the films atmosphere is lost in the process, giving it a made-for-television look.  At times the flesh tones seem natural, but then when we see the blood it looks a bit too dark.  These are not the details that make or break this kind of film, but it does hurt a tad on a technical standpoint.

The DTS Master Audio 5.1 audio track is a well-mastered and well-utilized when it comes to the film’s action sequences.  There is some good sound design work done here, adding tomany of the films wet and gory moments.  The dialog is mostly clear throughout.  It’s unfortunate that there isn’t much ambient work here to aim towards a spookier tone to the film, but it’s a track that gets the job done.

Audio Commentary:  Writer/director Lowell Dean and special effects artist Emersen Ziffle come together to do an insightful and entertaining discussion on the film.  This is one of the more entertaining commentaries I’ve heard in some time that covers just about every step it took to make this film happen.

Wolf Cop Unleashed: (45:51) A comprehensive look into the making of the film that covers from when the film was picked through CineCoup and through the process of getting the film made.  Very informative for those who have an itch to make films of their own one day.

The Birth of Wolf Cop:  A series of segments that the team behind Wolf Cop put together during the elimination process for the accelerator program to get their film made.  Running time together comes to about ten minutes.

Outtakes: (3:11) Your standard outtake reel, though the bits where we see ad-libbing done by cast members are amusing at times.

For many this is going to be a movie people will pass over before giving it a chance, but for those who are willing to indulge in this B-cinema romp, you’ll have a blast with a film that is sure to be considered a cult classic in no time.  While some elements may be a bit campy, I still dig this movie and have already gotten excited for the potential sequel on the horizon.

Brent Lorentson is a horror writer and film critic based out of Tampa, Florida. With a BA in Digital Film, he co-wrote and co-directed Scavenger Hunt. His short stories have appeared in various horror anthologies. In 2019 his short script Fertile Blood will be a part of the anthology horror film Slumber Party. He is currently working on his first novel A Dark and Secret Place set to be released in late 2019. Favorite Films: Taxi Driver, Fight Club, I Saw the Devil, The Wild Bunch, Dawn of the Dead, A Clockwork Orange, Pulp Fiction, Heathers, The Monster Squad, and High Fidelity.
Revelation: The End of Days Something Wicked