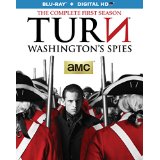 Everybody is talking about the next James Bond movie. It seems we’ve been fascinated by the spy genre since the early 1960’s. AMC has added a new wrinkle to the spy game with Turn: Washington’s Spies. When we say Washington we’re not talking about the city. We’re talking General Washington, George Washington. It’s a revolutionary show about a real-life spy ring from America’s fight for independence. Joining the redcoats is Samuel Roukin. He plays the nasty Captain Simcoe. I had the chance to chat with Samuel and he had some very cool insights into the character and the show. He even reveals a secret about the original fate of Simcoe that you are going to want to hear. He also gives us a sneak peak at season 2. The first season is now out from Anchor Bay. Bang it here to listen to my chat with Samuel Roukin.

Gino Sassani is a member of the Southeastern Film Critic's Association (SEFCA). He is a film and television critic based in Tampa, Florida. He's also the Senior Editor here at Upcomingdiscs. Gino started reviewing films in the early 1990's as a segment of his local television show Focus. He's an award-winning recording artist for Omega Records. Gino is currently working on his 8th album Merchants & Mercenaries. Gino took over Upcomingdiscs Dec 1, 2008. He works out of a home theater he calls The Reel World. Favorite films: The Godfather, The Godfather Part II, The Body Snatcher (Val Lewton film with Karloff and Lugosi, not the pod people film), Unforgiven, Gladiator, The Lion King, Jaws, Son Of Frankenstein, The Good, The Bad And The Ugly, and Monsters, Inc.
Live At Knebworth (SD Blu-ray) Bank$tas