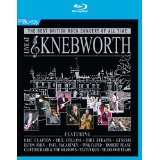 Anyone who has ever played an instrument or sung understands the therapeutic powers of music. In England they have been using that idea to help physically disadvantaged children with music at the Nordoff-RobbinsMusicCenter in London’s KentishTown. The institute was founded by American composer Paul Nordoff and British teacher Clive Robbins. They have thousands of success stories. We’re talking children who had closed themselves off from the world around them, many who had stopped speaking or communicating at all. The children come from all over the world. In the late 1980’s the Center was looking at the need to expand their facilities. To build a state-of-the-art facility would take a lot of money, so they naturally turned to the professional musical artists whom they had honored yearly with their own Silver Clef Award. We’re talking the likes of Elton John, Eric Clapton, Pink Floyd and Paul McCartney, heavy hitters, to be sure. Every one of them who were available immediately agreed to put on a super-concert to raise money for the new facility. The event was so successful that a second beneficiary was added because of the funds the show made available. The BritSchool Of Performing Arts was the added charity. It all came together for 11 hours on June 30th 1990 at a place called Knebworth.

The concert was billed as The Best All British Rock Show Ever Staged, and it very well might have been. The crowd was a living sea of rock ‘n’ roll fans. But it wasn’t really strictly a British affair. The crowd can be seen waving flags from many nations, the United States and Canada quite prominent. It was obvious that fans came from around the globe to see the historic gathering. It doesn’t look like they were disappointed in the least.

Between the headliners and other musicians, more than 100 artists would take the stage in those 11 hours from noon until 11:00 PM. They came ready to rock, and now Eagle Rock Entertainment has brought the overdue title to Blu-ray.

As is the tradition at these kinds of things, many musicians remained on stage as other headliners took over the spotlight. Eric Clapton and Mark Knopfler hung around for each other’s performances and Elton John’s show as well. Of course the release is not 11 hours long. That would have been impractical, but I would have loved to know what the full sets contained from each act. There are times I found the selections used here curious.

The concert is also not presented in chronological order. I know this because McCartney’s set bridges the time from light through and into darkness. The next thing you know it’s bright out again for most of the remaining three hours. The concert was also plagued by occasional rain that is obviously reaching the artists on stage. It didn’t appear to put any kind of damper on the enthusiasm of the artists or the crowd.

Here’s a list of the artists and the songs selected from each set to be included here:

Tears For Fears: Change, Badman’s Song, Everybody Wants To Rule The World.

Phil Collins & The Serious Band: In The Air Tonight, Sussudio

Status Quo: Whatever You Want, Rockin’ All Over The World, Dirty Water, In The Army Now

Eric Clapton: Before You Accuse Me, Tearin’ Us Apart

Dire Straits: Solid Rock, I Think I Love You Too Much, Money For Nothing

Genesis: Mama, Throwing It All Away, Medley

Pink Floyd: Shine On You Crazy Diamond, Run Like Hell

The age of the concert certainly shows through with some of the lineups. It was odd seeing Linda McCartney back on stage with Paul. I was most pleased to see Leland (credited as Lee) Sklar on stage with Collins and several others. He’s one of the best studio musicians in recording history and has appeared on almost everyone’s albums in the 70’s in particular. He’s recorded with the likes of Simon & Garfunkel, Neil Diamond, Phil Collins, James Taylor, Clint Black, Crosby Stills Nash & Young, Hall & Oates, The Eagles, Lyle Lovett, Michael Jackson, Joe Cocker, Ray Charles, Jackson Browne, America, Randy Newman, The Oak Ridge Boys, Poco, Linda Ronstadt, Rod Stewart, Warren Zevon and Rick Springfield. Now that’s a ton of music history on one stage behind a bass guitar.

Mark Knopfler must have had a bone to pick with MTV, because he refused to say the network’s name on Money For Nothing twice. The background singers did, but it was obvious Knopfler was deliberately cutting the reference.

The concert is presented in its original aspect full frame. The 1080i image is arrived at with an AVC MPEG-4 codec at an average 35 mbps. They call this an SD Blu-ray, and you’ll quickly understand why. It’s obviously the best print available, but even with an upconvert HD remaster there are a few flaws in the quality. It was taken under harsh conditions in 1990 and should be judged accordingly.

The DTS-HD Master Audio 5.1 is where you will find the best of the restoration. There is a marked improvement of sound over picture here. When we’re talking a concert it sounds like the priorities were in the right place. The sound is crisp with nice instrument and vocal separation. There’s not a good sub response, which is the only thing that mars this solid audio presentation. You can opt for an LCPM stereo track, but why would you?

This was one of the best concerts I had never heard of. You can’t complain about the lineup. There’s a little something there for everyone. It’s also a rather nice snapshot of these artists and bands as they were in 1990. “It’s been a long time.”

Gino Sassani is a member of the Southeastern Film Critic's Association (SEFCA). He is a film and television critic based in Tampa, Florida. He's also the Senior Editor here at Upcomingdiscs. Gino started reviewing films in the early 1990's as a segment of his local television show Focus. He's an award-winning recording artist for Omega Records. Gino is currently working on his 8th album Merchants & Mercenaries. Gino took over Upcomingdiscs Dec 1, 2008. He works out of a home theater he calls The Reel World. Favorite films: The Godfather, The Godfather Part II, The Body Snatcher (Val Lewton film with Karloff and Lugosi, not the pod people film), Unforgiven, Gladiator, The Lion King, Jaws, Son Of Frankenstein, The Good, The Bad And The Ugly, and Monsters, Inc.
Vice (Blu-ray) Exclusive Interview With Samuel Roukin From Turn: Washington’s Spies