Digging Up the Marrow 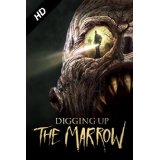 What if monsters were not just a thing of our imagination, that all the movies we’ve seen and books we’ve read were not just creatures that entertained and horrified us, but actually existed beyond the woods and in the darkness?  That is the jumping off point for director Adam Green’s new project Digging Up the Marrow.  Only this time his film takes a very Meta approach and is done as a documentary. What instantly came to mind was Blair Witch Project in the execution of the film.  Sure, there have been many copycat films since the release, and it has spawned an entire genre of filmmaking with found footage, but how does Digging Up the Marrow measure up?  Does it hold its own in a genre that seems to be played out?

First I’d like to say if you already plan on checking out the film, do yourself a favor and just watch it. Avoid the trailers or any talkbacks; this is a film that should be experienced with as little exposure to the plot as possible.  Even with writing this review I’m trying to censor myself more than usual simply because this isn’t so much a film you watch over and over because of how great it is, it’s a film you instead go into for the experience of what the hell will happen next.  Once the twists have been revealed, though, it’s still a fun viewing experience; it’s still just not the same thing.  So here is your last chance to click away from the screen.

If you’re still reading, either you’ve seen the film already or you are still a little uncertain what to make of this film.  Well, the film is done as a documentary directed by Adam Green and starring himself as well as his camera operator Will Barratt.  Just about everyone in the film is playing themselves, whether it is directors Adam comes across at a horror convention or employees at his studio.  The only character in the film that is not “real” is William Dekker (Ray Wise), and this is one hell of a fun character who has been created here.  Dekker comes off as a raving nut that believes he knows of a place where monsters dwell beneath the surface, and he wants to take Green and his cameraman to the location so they can get proof that these monsters exist.  To say any more truly would take us to spoiler territory, and I just can’t give up any more details.

If you were looking for a more straightforward film like Hatchet or Frozen, this isn’t that film, but don’t let the found-footage aesthetic scare you off, because this is something worth checking out for when all the lights are out.  For those of you who were old enough to remember when The Blair Witch Project came out and how people would watch the film questioning what could be real, whatever happened in those final moments?  Digging Up the Marrow takes me back to that film and that experience, and of course I know this is only a movie, but I absolutely love the approach taken with this film to attempt to document monsters.

The biggest complaint I see the film getting is of course the “shaky cam” effect being a nuisance, but really there isn’t that much to complain about.  When it comes to Green’s performance, it was a good move on his part to play a version of himself, and to be fair, Wise does such a good job that he steals just about every moment in the film.  It was still a risk on Green’s part to star in his own film, but under the circumstances it worked.  It worked because I saw myself asking the same questions and reacting the same way as numerous other horror fans would if it were them getting the opportunity to expose the truth about monsters.  The balance of fear, excitement and denial is just what you’d expect.  As for what worked the best, the restraint used and always keeping in mind less can be so much more effective than throwing it all on the screen.

This is one of those films, though, I see dividing fans, those who love it and those that will love to hate on it.  It’s a ride for everyone who enjoys horror and the stories about the monsters in the darkness that go bump in the night.  Though it’s only a movie, the question still remains, what would you do if you were to discover monsters were real?

Brent Lorentson is a horror writer and film critic based out of Tampa, Florida. With a BA in Digital Film, he co-wrote and co-directed Scavenger Hunt. His short stories have appeared in various horror anthologies. In 2019 his short script Fertile Blood will be a part of the anthology horror film Slumber Party. He is currently working on his first novel A Dark and Secret Place set to be released in late 2019. Favorite Films: Taxi Driver, Fight Club, I Saw the Devil, The Wild Bunch, Dawn of the Dead, A Clockwork Orange, Pulp Fiction, Heathers, The Monster Squad, and High Fidelity.
Exclusive Interview With Steve Wolsh: Writer/Director Of Muck Pioneer (Blu-ray)