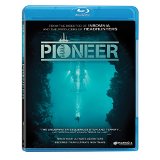 The Norwegian oil boom of the early 1980s isn’t the most obvious setting for a thriller, but director Erik Skjoldbjærg manages to squeeze plenty of intrigue out of what seems like a pretty dry subject. Of course, Pioneer could never be described as “dry” in the literal sense since the film follows a group of commercial divers in Norway as they try to establish the country’s first petroleum pipeline 500 meters underwater.

Petter (Aksel Hennie) is a brash professional diver obsessed with reaching the bottom of the Norwegian Sea. Norway has partnered with American company Deep Sea Diving to lay the country’s first oil pipeline. (Avatar’s Stephen Lang plays an American supervisor.) Petter and his more family-oriented brother Knut (Andre Eriksen) are part of the group of divers, which also includes a jealous American rival (Wes Bentley). The movie opens with a hallucinatory training exercise that sets the film’s hazy tone.

After a disastrous accident during a preliminary “verification dive,” Petter becomes obsessed with figuring out what went wrong. Did the Americans intentionally use faulty equipment so they could make Petter and the Norwegians look bad, and grab a bigger chunk of the pipeline operation? Is the Norwegian government involved, considering the country stands to become one of wealthiest nations in the world? Or maybe there is no conspiracy, and Petter simply made a tragic mistake. This last option is absolutely on the table, since Petter and all the other divers are highly susceptible to decompression sickness.

Skjoldbjærg previously directed Insomnia, which was remade by Christopher Nolan for American audiences. (In a related story, Pioneer might be getting its own American remake courtesy of producers George Clooney and Grant Heslov.) Here, the director gives us another addled, stressed out protagonist struggling to discern what is real. Petter suffers from hallucinations and has a nasty habit of blacking out, and Skjoldbjærg does a nice job of putting us in his woozy state of mind.

The true visual marvels of the film occur whenever Skjoldbjærg and cinematographer Jallo Faber take the camera underwater. The diving scenes are breathtaking (pun intended) and achieve a dreamy, otherworldly quality that further puts us in Petter’s unsteady boots.

I wish the film had found an above-ground version of that beauty. It might have helped cover for a script that is somewhat lacking in substance upon close inspection. (The screenplay is credited to Skjoldbjærg and *four* other writers, which is not usually a great sign.) The story is told from Petter’s paranoid perspective. The idea is probably to keep the audience guessing, but it unfortunately robs both the higher-ups and the fellow divers of some depth. (Pun intended, again.) As a result, the scenes that take place out of the water have a chilly grimness — occasionally broken up by explosive bursts of violence — that prevents us from totally becoming invested in Petter’s investigation.

It’s certainly no fault of Hennie, who gives a committed, charismatic lead performance. He’s essentially on screen the entire time, and he convincingly vacillates between jovial, guilt-ridden, and terrified. Hennie’s performance is more believable than a lot of what happens in the movie. Unfortunately, there’s not much to say for the rest of the cast. Lang seems to have mostly been hired because we’ll instinctively distrust his authoritative character based on his work in Avatar. Bentley appears to be onto something as a jerky, ugly American diver until…he’s not anymore. Stephanie Sigman — as Knut’s wounded wife — occasionally seems to be on the verge of doing something interesting, but never quite gets there.

Pioneer actually has a pretty interesting answer for what happened in that catastrophic verification dive. It should be a gut punch of a revelation, but it’s delivered in a way that is likely to elicit an eye roll or a shrug. (Or both.) Still, there’s plenty to like in this film, which made me care about the Norwegian oil boom of the early ‘80s a lot more than I ever thought I would.

Pioneer is presented in an aspect ratio of 2.35:1. The 1080p image is arrived at with an AVC MPEG-4 codec at an average of 19 mbps. The film is a period piece, which helps account for the pleasingly grainy appearance. The film also incorporates some rough-looking archival footage, but also boasts some rare moments when the image is clean, bright and crystal clear. That’s the exception, however, as the director utilizes a good amount of intentional blur and haze when Petter is stressed. (Which is very often.) Black levels are deep enough and boast strong — if not quite pristine — separation during the underwater scenes. It’s a tricky image to judge, but I believe this Blu-ray from Magnolia Pictures captures the filmmaker’s goal: Pioneer isn’t just set in the early 1980s; it looks like it was made during that time too.

The DTS-HD Master Audio 5.1 track features dialogue that is about 85 percent Norwegian and 15 percent English. Beyond that, it’s a powerful, all-consuming track that also shows a surprising amount of restraint when the action moves below surface. Rather than overwhelming the viewer with noise, the track boasts carefully-considered separation. (The hiss of machinery confined to the rears, for example.) To be honest, I feel like the speakers could’ve taken things up a notch during the accident and a few key, action-packed moments. I also enjoyed the synth-y soundtrack by Air, which is given room to roam the entire surround sound field.

Behind the Scenes Featurettes: (27:21) There are five mini-docs in all: “Reflecting on the Cast”, “The Crash”, “Locations and Production Design”, “Diving”, and “The Accident.” The standout is easily “The Crash”, which reveals the scene in the film where Petter flips his jeep during a high-speed chase was an unplanned accident (and could’ve easily killed the film’s star). Speaking of Hennie, “The Accident” is also interesting to watch because of the personal connection the actor formed with his character due to a real-life loss he suffered before taking on this role. Features a Play All option.

Making of Pioneer: A Dive Into the Depths of the Sea: (8:01) Focuses on the incredible underwater diving sequences. Filming took place in the crystal clear waters of a fissure next to an Icelandic lake. The crew also talks about the challenge of implementing modern updates to the ‘80s diving equipment the actors use on camera

Working on Pioneer — Stephanie Sigman and Stephen Lang: (6:32) Two of the non-Norwegian cast members say very complimentary things about filming in Norway. It was interesting to learn Sigman (a Mexican actress) didn’t speak a word of Norwegian before she was offered a role that required her to speak nothing but Norwegian.

AXS TV: A Look at Pioneer: (2:19) A glorified trailer with footage from the featurettes and interviews mixed in.

The Blu-ray cover art makes Pioneer look like a sci-fi adventure akin to The Abyss, but it really has more in common with the likes of The Parallax View and 3 Days of the Condor.

Pioneer is certainly on the chillier side of those offerings, but it’s recommended if you enjoy a good old-fashioned conspiracy thriller.

Digging Up the Marrow WKRP In Cincinnati: Seasons 1 & 2