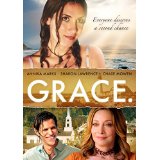 Grace takes a refreshing approach to unfolding the story; it gets right to the point. When Grace is introduced, she is right in the thick of things, waking up alone half-naked on a beach after a night of excess. She is shown some kindness by a stranger who wastes no time letting her know that she has been where Grace has been and offers her the opportunity to change. Now, naturally, this is too easy; any audience member would see through that. The one thing everyone knows about life is that though as human beings we have the capacity to change, we tend not to do it until something forces our hand; we need a catalyst, and fortunately the film provides a great one: the threat of jail time.

OK, OK, albeit the threat of jail time is a bit cliche when it comes to forcing someone’s hand, it is arguably the best way to get someone to do the desired action; otherwise police would have to find a new tactic to get criminals to testify against one another. Grace is ordered to attend mandatory Alcoholics Anonymous sessions to help her get a handle on her problem. As to be expected, she resists at first. In this area the film does not strike any new chords, Grace repels in your typical ways: hostility, avoidance, etc. However, during this period it is where the supporting cast becomes important, especially those we come in contact with through the mandatory AA sessions. For it is their addition that helps move the plot along.

During this time we are treated with everyone’s personal tales of tragedy that stemmed from their abuse of alcohol. I do have one caveat in regards to everyone’s personal tragedy: the one tale we do not hear directly from the person that experienced it is Sharon Lawrence’s character’s. Her tale is told from the perspective of those around her; I find this to be a mistake. I think that this tale would register better with the audience had we been treated to hearing it directly from the source. Then we would have gotten real emotion behind it. Just as it holds true in real life, the only person who can give you the truth is the person who witnessed it.

The film tackles a heavy issue, alcoholism, which is a real and true issue in everyday life, making it an easily a relatable topic. What the film does well in my opinion is attack the problem at all angles. During its brief runtime, we encounter people who have lost loved ones, individuals who continue to carry out destructive patterns that can only end one way, and the idea that a person must obtain sobriety for their own sake rather than the sake of another. The last portion was a great deal of what the latter half of the film made up. Grace hit this issue hard as she struggled to confront the tragedy of her past that we come to realize is at the heart of her own problem.

Grace revealed a powerful message on the problems of alcohol abuse. Granted it can get a bit preachy on the subject making it akin to a Hallmark or Lifetime movie; it still gets its message across with very little dillydally and held my attention. It was a learning an experience and a worthwhile experience, worth checking out.

Jeremy Butler is a film school graduate of the International Academy of Design and Technology. He is been writing for Upcomingdiscs since 2012; however, movies have played a big part of his life for much longer. Favorite genres include horror, science fiction/fantasy, and comedy. Favorite movies are V for Vendetta, Boondocks Saints, Kiss Kiss Bang Bang, and The Godfather.
Exclusive Interview With Lachlan Buchanan Of Muck Interstellar (Blu-Ray)