Posted in: Disc Reviews by Archive Authors on March 31st, 2015 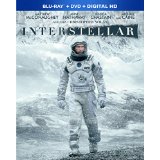 Most movies are just not very good. Lots of money goes into turning out boring, repetitive garbage. You watch it and then dispose of it and make room for the next thing. There are some who do more, but the more you do, the greater the risk. Most filmmakers are not given the freedom to take really big risks, but someone who has been given the opportunity to take the big risk is Christopher Nolan. Interstellar is $165,000,000 gamble shooting for the moon.  Actually Nolan is shooting for something way past the moon. He wants to take us to another galaxy. There is so much speculative science in this film that it is mind-boggling. The cutting edge of real science is, frankly, getting crazier and crazier. The average person really has no idea how crazy, but Interstellar is going to try to show us just how crazy. The true nature of some of the elements of the theory of relativity and other related theories is that they defy all logic.

Earth is in great peril at the end of the 21st century due to massive dust bowls and an unidentified blight. The only chance is to start over somewhere else off the surface of our planet. Most people don’t realize how bad things are, but Cooper (Matthew McConaughey) is a former astronaut who is recruited by a secretly reformed NASA. He doesn’t want to leave on what may be a very long journey into the unknown, and his young daughter is devastated. I don’t want to reveal too much of the plot, but I will say it takes nearly three hours for all the plot points to be revealed. It might be helpful to know that Nolan’s goal was to deal with many of the same themes as 2001: A Space Odyssey but expand on them in light of new knowledge. It is suggested that some aliens have powers we can’t even imagine. It is suggested you can walk down a corridor of time and visit any point at will. Alice has fallen down the rabbit hole and through the looking glass where anything is possible.

Interstellar is presented in both original aspect ratios of 2.39:1 and 1.78:1. The 1080p image is arrived at with an AVC MPEG-4 codec at an average 35 mbps. The shift in aspect ratio has to do with Nolan’s use of IMAX in parts of the film and not others. It’s pretty much what you got in the final Dark Knight film. The shift is absolutely seamless, and you will not even notice it unless you are particularly watching for it. Whatever aspect ratio is being presented, you can expect an incredibly sharp image just loaded with fine detail elements. Contrast is magnificent as it displays the deep darkness of space against planets and ships. Black levels are easy to get lost within. It’s a critical part of this high-definition image presentation, and it never lets you down. There is film grain just as Nolan intended for there to be. It gives life to those still moments in a way digital really can’t. It was a smart choice, and you will appreciate the nuances of the film here. It might be the end of an era for film, but it’s going out with a big bang. Nolan insisted the film be available to theaters on film even after Paramount announced an end to film distribution. Savor it here. Any digital noise is infrequent enough to distract from your viewing pleasure.

The DTS-HD Master Audio 5.1 is the expected mixed bag. There have been complaints about the score and other sounds drowning out the dialog. At first Nolan blamed it on the theaters and how they were presenting the film. Soon enough he admitted it was the effect he was going for. It’s fine, and that’s why God made subtitles. My only issue is that his first reaction was to blame hardworking projection folks who make a lot less money than Nolan does for this movie. Just own up to the “style” from the start, and either people will accept it or they will not. And it does create issues. It is hard to find the right balance where the sub levels are low enough to keep from shattering your windows and yet you can hear everything else. I ended up adjusting my sub-woofer down until I found a compromise. Once you get passed that issue you’ll find a stunning audio presentation. Hans Zimmer delivers one of his best scores. It is also most effective when it is quiet and thoughtful. There’s true emotion there, and I wish Nolan had trusted that emotion enough to play it all straight with us. It’s all very dynamic and certainly a show-off presentation for your home theater. The surrounds offer wonderful depth, and this is an awesomely immersive experience. It just may take you a while to find the right balance. I suggest you do a trial run and make those adjustments before having anyone over for a screening.

The film is found on its own dual-layered disc. It was smart to not try to include extras on the same disc. They can be found on a separate disc. There is a ton of great stuff here, but again Nolan expects us to have to work for our entertainment. OK, he likely had nothing to do with the setup. Still, most of the behind-the-scenes materials are broken up into too many small chunks with no play-all option. This means you’ve got to have the remote handy every 5-13 minutes to click on the next section. It is obvious that it’s all one piece and should have been offered that way. Please stop making me have to work so hard. It just isn’t necessary. It’s done somewhat for royalty issues and so they can list a larger number of bonus features.

The Science Of Interstellar: (50:20) Now this is a standalone piece. It plays very much like a documentary you might see on History. Matthew McConaughey narrates the piece. It focuses on the theories of Kip Thorne on whose ideas the film is based. There’s tons about space travel, time travel, black holes, wormholes and gravity. The filmmakers tie all of this science with the film. There is certainly a ton of things to learn here.

Plotting An Interstellar Journey: (7:49) Here’s where the “pieces” start. Here cast and crew talk about the big ideas and how the film is built upon them.

Life On Cooper’s Farm: (9:43) A look at the location for the farm. A lot about growing corn where it had never been grown before and the fact that green corn doesn’t want to burn.

Tars And Case: (9:27) A look at the development of the robots. Plenty of behind-the-scenes stuff showing the practical elements of bringing them to life.

The Cosmic Sounds Of Interstellar: (13:37) Check out the recording sessions in a church where the pipe organ was. So they brought the entire orchestra and choir there.

The Space Suits: (4:30) This would be your wardrobe piece.

The Endurance: (9:24) Conceptual art and other development tools demonstrate the ship from idea to final image. There’s a set tour also.

Shooting In Iceland: (12:42) A look at the logistics of filming in the remote areas of Iceland for Mann’s Planet and Miller’s Planet.

The Ranger And The Lander: (12:20): More ship design and another set tour.

The Simulation Of Zero G: (5:31) A look at the tricks and techniques to simulate weightlessness.

Celestial Landmarks: (13:22) Back to Kip Thorne and the equations on the blackboard.

Across All Dimensions: (9:02) This one focuses on the tesseract.

Final Thoughts: (6:02) Cast and crew put their own take on all of this stuff.