Posted in: The Reel World by Archive Authors on March 31st, 2015 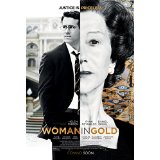 Most true life stories are remarkable in some way. If you can get to the truth of real-life history, it almost always unearths treasures of understanding. Art is the process of revealing hidden truth and beauty in real life. Woman In Gold is the story of a painting that was sold for $135,000,000 in 2006 to an heir of Estee Lauder. It was the highest price for a painting at the time. There is a remarkable story that takes place around the painting. It involves the Nazi theft of art in World War II. A previous film, Monuments Men, tackled the subject a couple of years ago. The challenge that both films faced is making the subject of art important when mixed with the chaos and horror involving human life during the period. Then there is the painting itself, which is so iconic that it was called the Austrian Mona Lisa.

Woman In Gold covers a lot of ground from the creation of the work itself (also known as Portrait of Adele Bloch-Bauer I) by Gustav Klimt in 1907 through the traumatic and catastrophic war years to the eventual battle to find justice and closure.

Woman In Gold has a complicated structure involving various intertwining stories that essentially centers around Maria Altmann’s life (played by both Oscar winning actress Helen Mirren and Tatiana Maslany of Orphan Black). Maria is the niece of the woman in the painting who miraculously escaped Nazi Germany just before things got really bad. She is potentially the owner of the famous painting among other paintings. She is a family friend of the descendants of the famous composer Arnold Schoenberg and meets with a young struggling lawyer, Randol Schoenberg (Ryan Reynolds). A large part of the movie flashes back to wartime Austria as the central story of the legal battle over the painting proceeds which culminated in Republic of Austria vs. Altmann in 2004. The wartime portion are evocative of great older films like Casablanca and The Third Man. That is part of the problem with this film. It struggles to bring a fresh angle to material that has been covered countless times. The approach by director Simon Curtis (My Week With Marilyn) is very safe and routine, but the stories are extremely moving none the less.

When Randol initially takes up Maria’s cause, it is in the midst of re-establishing his career with a large law firm after an attempt to start his own practice. He does it grudgingly at first but finds his connection with his own heritage begins to overwhelm him.

Both Reynolds and Mirren are excellent. Ryan Reynolds always seems to be on the verge of being the new Tom Hanks but has yet to get those kinds of iconic roles that will put him over the top. There is a great cast filling out many supporting roles, most notably Elizabeth McGovern (Curtis’s wife), Katie Holmes, Charles Dance, Daniel Bruhl, Jonathan Pryce, Max Irons and Frances Fisher. There are many more names to mention, but I won’t because it is overwhelming. The story is overwhelming in its attempts to rein in the various elements of the octogenarian Maria’s life. Many elements of story are wedged in, and the story could have probably been better told in a miniseries where the elements would have the ability to breathe. The one element that manages to rise above the rest is Maria’s mercurial nature. Her emotions pull her in many directions. You can feel her desire to both move on and remember at the same time and stay grounded while also embracing the whole unlived lives of the past and all the people she left behind.

Woman In Gold tells many great stories but is a little prosaic and predictable in its approach. It might have benefited from a more exotic and exciting artistic strategy to make it seem more than a movie of the week. A great movie about the importance of great works of art in the midst of the chaos of the greater scheme of things has yet to be made. Ultimately, the question is, “Is any work of art greater than a human life?”