An Act of War 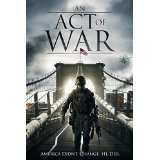 I feel obligated to say that I somewhat saw the ending for this one coming. Maybe not all the details, but there were some clear signs from the beginning that pointed me in the direction of how the film was going to conclude. However, as I’ve been told some many times in my not-so- long life, it is not about where you end up but how you get there. In the case of this film, the journey is quite the experience. The film opens with a bit of a flash-forward which comes off a bit disorienting at first, because we don’t really know the context for the type of incident which has occurred. Slowly I was able to sort of put the pieces together. A man walking around the apartment was a cop, and he was at the house of the victim familiarizing himself with the details of the crime. The flash-forward doesn’t drag on, which is a plus, given that in truth it wasn’t very interesting, and my interest was beginning to wane. From there we are introduced to our central character, Jacob, although he prefers to go by Nicks (his last name).

A couple things about Nicks become clear very early on: he was a soldier in the United States Army, he has returned home from service, and he is haunted by something that happened to him during his service overseas. Nicks leaves a relatively quiet life; he works the night shift at a theater as a projectionist; he is very enthusiastic about film, as he regularly has film developed at a local establishment, and he frequents a local dinner usually just for coffee. It becomes evident that Nicks doesn’t sleep. In fact throughout the film I don’t believe we ever see him sleep. The one thing Nicks tends to do that strays from the norm is to frequent the same prostitute regularly, it would seem. This appears to be the character’s only relationship of substance, as it is obvious that he desire more from the relationship than just sex.

Through the lens of this relationship we are treated to our first real insight into the character and the memories that haunt him. The revelation of his time as a prisoner of war explains a lot about Nick’s demeanor and further fueled my determination of the film’s conclusion. The dark descent of the character was of particular interest for me; the otherwise mundane character shows new life as he descends into madness. It’s always fun to watch, and the descent is handled very well in this context, slowly progressing into madness instead of diving in head first. It is very subtle at first, the alienating and isolation of Nicks away from the very few people he has allowed in his life.

I really appreciated the style of this film; choosing to display the film in a black and white format rather than color format I think gave a better view of the type of world the character found himself a part of. It really came to play a large role in the characters’ actions during the climax, sort of a black and white view of the world. It also gave a grittier look to the setting as well as making it more difficult determining whether it was night or day. Most the of the settings took place indoors with the emphasis placed on the character interactions, so the time of day become less important; however, in hindsight it made it more difficult to determine how long Nicks had been awake, which would contribute to his state of mind. Black and white allowed for a darker world, and it was what was needed to make me appreciate the circumstances of the film.

When it comes to the character of Nicks, I could not help but see it as a sad commentary on the state of in which some of our brave men and women return from the war: broken. I recognize his tragedy as the wake-up call that I believe it was intended to be, because his end was avoidable had he had the right people around to aid him in his trying time. His circumstance was completely believable too; the writers did a fantastic job on of keeping his circumstance based in reality. Nothing about what happen to Nicks was at all unbelievable; it was all plausible including the conclusion.

In conclusion, this is the type of film to watch when you’re in need of a reality check about the world and human suffering. I promise you, after watching this, you will feel humbled by the experience and it may possibly change your perception on certain things. I know that it has for me. Fair warning though, it does not take much stretch of the imagination to predict the film’s end, however.

Jeremy Butler is a film school graduate of the International Academy of Design and Technology. He is been writing for Upcomingdiscs since 2012; however, movies have played a big part of his life for much longer. Favorite genres include horror, science fiction/fantasy, and comedy. Favorite movies are V for Vendetta, Boondocks Saints, Kiss Kiss Bang Bang, and The Godfather.
The Rewrite (Blu-ray) Danny Collins