Posted in: Disc Reviews by Gino Sassani on April 4th, 2015 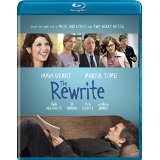 It’s been six years since Hugh Grant teamed up with director Marc Lawrence. It’s their fourth collaboration. It doesn’t appear that Lawrence is willing to direct a film that doesn’t feature Hugh Grant, because he hasn’t. Let’s just say the fourth time wasn’t the charm. In fact, it wasn’t even all that charming. And the problem is that Grant and Lawrence have attempted to build careers out of making Grant charming. By now they’re just trying too hard, and the result is a poor showing that was in desperate need of a Rewrite.

Keith Michaels (Grant) is a one-hit wonder screenwriter. It’s been 15 years since that hit, Paradise Misplaced, and he hasn’t had much luck repeating the success. The bills aren’t getting paid, and when his lights literally go out, he decides to “stoop so low” as to accept a teaching position on the other side of the country in a small town known as Binghamton, New York, best known as the birthplace of Rod Serling. Cue the warped Twilight Zone riff. He isn’t in town long enough to have a quick bite of fast food when he’s already sleeping with one of his students, Karen (Heathcote). It’s a pretty good match, because both are arrogant and rather too much in love with themselves. He insults the dean of ethics, Jane Austen junkie Mary Weldon (Janney) and dismisses his students for a month after his first five-minute class. He and the film are off to a promising start…yeah, right.

Cue the rom-com clichés, because they’re going to start rolling in like high tide at Atlantic City. Stop me if you’ve heard any of these before. He’s sleeping with the young “hot” chick who is just manipulating him, while he’s really falling in love with the more mature and sensible woman. That woman is Holly, played by Marisa Tomei, who is completely wasting her time and talents here. (Stopping me already?) But there’s so much more. He’s got a wacky “hip” neighbor named Jim (Elliott). (You really have to quit stopping me.) He eventually finds himself warming to the teaching gig (what did I say about stopping me?), stops the destructive behaviors, and turns his back on his beloved Hollywood lifestyle. (I really wish I hadn’t said “stop me if you’ve heard this before”, it’s actually quite annoying) All of this happens in a flurry of contrived situations and completely unoriginal montage moments.

The only saving grace of the film is the underused J.K. Simmons as the department chair who kind of likes Keith even with his problematic flaws. Simmons steals every scene he appears in. His ability to turn this trite material into something interesting stands in such sharp contrast to Hugh Grant, who attempts to get by with a “cute” accent and an overused smile, one that appears far too practiced in far too many mirrors.

Film buffs might enjoy the plethora of actor and film references, but I would have had a better time reading the names from a few IMdb pages. Usually, I can find something likable in a film. I wish I could say that was the case here.

The Rewrite is presented in its original aspect ratio of 2.40:1. The 1080p image is arrived at with an AVC MPEG-4 codec at an average 35 mbps. The high-definition image presentation looks fine enough. But it’s rather as uninteresting as the film itself. Colors are rather drab, and nothing really stands out here. There are no wonderful textures or atmospheric vistas to excite our eyes here. The image is too soft for such a recent film. While there are no obvious flaws to complain about, there’s nothing outstanding, either. It’s a perfectly mediocre image.

The DTS-HD Master Audio 5.1 is there only to serve the trite dialog. Surrounds are lacking, and there’s nothing dynamic going on here. To a certain degree that’s fine. It’s a character film, albeit with no character, and it was never intended to be either visually or audibly stunning. That’s one mission firmly accomplished.

Deleted Scenes: There are two with no play-all. One is a running joke that was axed, while the other has Grant’s students reading portions of their screenplays. More of that can be found during the end credits.

Making Of The Rewrite: (7:47) Strictly a synopsis with clips.

Hugh Grant hasn’t been interesting since his prostitute scandal, and that’s a shame. I get the impression there’s talent to be found, but he’s content to smile his way through everything he does while phoning in any kind of performance. This one has something in common with a Star Trek inside joke that goes back to the original show. There are these pipes that the production design crew labeled GNDN. It means goes nowhere “does nothing”.

Gino Sassani is a member of the Southeastern Film Critic's Association (SEFCA). He is a film and television critic based in Tampa, Florida. He's also the Senior Editor here at Upcomingdiscs. Gino started reviewing films in the early 1990's as a segment of his local television show Focus. He's an award-winning recording artist for Omega Records. Gino is currently working on his 8th album Merchants & Mercenaries. Gino took over Upcomingdiscs Dec 1, 2008. He works out of a home theater he calls The Reel World. Favorite films: The Godfather, The Godfather Part II, The Body Snatcher (Val Lewton film with Karloff and Lugosi, not the pod people film), Unforgiven, Gladiator, The Lion King, Jaws, Son Of Frankenstein, The Good, The Bad And The Ugly, and Monsters, Inc.
Daryl Hall & John Oates: Live in Dublin (Blu-ray) An Act of War