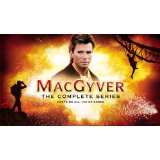 MacGyver (v) To act in an extremely resourceful manner. To utilize everyday items in unconventional ways to achieve a difficult task. I predict it will not be long before you can open your trusty copy of Webster’s and find this character has officially entered our lexicon. There is little doubt but that it is an unofficial part of it now. Crossing over from the realm of pop culture and into our language is a phenomenal achievement for a television show.

I came to the MacGyver party rather late. Like everyone else on the planet, I was certainly aware of the show and the clever abilities of the lead character. Still, with so many other shows to watch, I never saw a complete episode. Then came Stargate SG-1. This was another series I at first avoided. I thought the original film was OK, but nothing I’d care to see week in and week out. One day while my wife was taking our neighbor’s dog to the vet I was bored and sat down to an episode on Showtime. I was hooked, not only on the series, but the characters, along with their alter-ego actors. Richard Dean Anderson I found most compelling. I must admit to confusing him at first with the Richard Anderson of The Six Million Dollar Man fame (Oscar). Finally I sat down to some MacGyver on DVD.

Richard Dean Anderson really is MacGyver. OK, maybe he’s not quite so handy with a paperclip and matchbook, but his own acting ability and charm make MacGyver more enjoyable than the formula that has become so renowned. They share the love of hockey. Anderson was slated to be a hockey star before injuring both legs. Both men hail from the wilds of Minnesota. The two also share an environmental crusade. These traits also coincidentally apply to Jack O’Neil.

Harry’s Will has to be one of the most popular episodes in the show’s run. Not only is it great material for Anderson to play against, but we learn so much more about the character. This is also quite a star-studded outing with the likes of Henry Winkler, James Doohan, Rich Little, Dick Butkus, and Abe Vigoda. There’s another wonderful fantasy episode where MacGyver dreams he’s in the Old West ordering mail order brides that turn out to be the various women in his life. In The Legend of the Holy Rose, MacGyver is engaged in an Indiana Jones adventure tied to the Holy Grail. In other episodes MacGyver travels in time and encounters alternate versions of folks he knows.

When the series finally ended after seven years in 1992, fans were not so happy. As with many shows there were efforts to bring the show back. The problem here is that the show wasn’t really cancelled, per se. It had run its course. Even fans like myself have to admit that things had pretty much gone as far as they could. The show finally jumps the shark when Mac is sent to the Court of King Arthur an episode more appropriate to Anderson’s subsequent role in SG-1. Fan-favorite villain, Murdock, returns again to taunt MacGyver in one of the season’s few shining moments. At least that’s what we thought. Anderson returned for two made-for-television films that came out in 1994.

What’s not to love about MacGyver? I’ve been told it’s a guy thing, but I disagree. More than one woman I know has remarked they considered Anderson quite a looker. I can’t really speak to his hotness factor, but I can tell you the coolness quotient is high enough to make this work. Bittersweet is the best description of this last box set of MacGyver episodes. There are no real extras added. The box looks good but it is one of those setups where the discs are free-standing and not in good sleeves or cases. It’s great to have the collection together in one place, but your discs are safer in the season collections. The real added feature here is that it conserves a little space, but not really as much as you might expect.

You get all 139 episodes on 38 discs. These are the exact discs from the season sets down to the artwork on the discs themselves. You get a fold-out sheet with synopsis of all the episodes. The bonus disc contains the two reunion films:

It’s an international adventure when MacGyver and Professor Atticus ( ) are on the trail of the lost city of Atlantis. When they find an inscription that translates to “Atlantis Rises”, they decide they might be on to the find of a lifetime.

Five years later and Atticus is lecturing on his findings. He believes that the city was built on the edge of a volcano and possessed something called the Torch of Truth. But when the city was destroyed, the Torch was hidden in an Ark, and now he thinks he knows how to find it. But the Academy is not about to finance such a fanciful adventure. With MacGyver’s help, the quest continues. But it leads them to a military installation, and the guys with the guns aren’t very friendly. The quest goes from Greece to England. The adventure leads the team to an active volcano and treacherous tombs and catacombs.

In an interesting bit of trivia, Anderson as O’Neil in Stargate would travel to another version of Atlantis in that franchise. It should also be noted that the pilot to the Atlantis series was called Rising.

MacGyver travels to England for the birthday celebration of his buddy Paul Moran (Farrell). There he gets introduced to Paul’s daughter Elise (Headey). Of course, when guys like MacGyver go on vacation, it’s not going to be a simple walk in the park. The party is crashed by assassins who kill Paul. With his dying breath he mumbles the words “sample pack”. When MacGyver looks around, he discovers the terrorists have also taken Elise. When she is also found murdered, MacGyver vows to stay and get these guys. He’s joined in his effort by Natalia (Edney), a former KGB agent with contacts in London. The trail leads to a covert nuclear power plant and stolen technology and weapons. Of course, it’s a case of who to trust and some twists of identity. And then there’s MacGyver’s ingenuity. A perfectly MacGyver English adventure.

There were rumors of additional films; in fact, there still are. But Anderson got promoted to an Air Force colonel and took his show on the road … a long road to other planets in the Stargate franchise. His participation has been limited even in the last years and films of that popular franchise. Honestly, the last time I saw him as Jack, I thought he had lost a step. He just looked tired. Combine the fatigue with family obligations, and I’m not sure we’ll see MacGyver again. When he returned for a Super Bowl ad, the rumors geared up again. Unfortunately, I have pretty solid sources. There may be another MacGyver, even a major film. But, Anderson won’t be the one working with those paperclips and fishing line. You might as well pick up this last hurrah from Anderson’s MacGyver. It’ll complete the collection nicely. “You could say that, yeah.”

Gino Sassani is a member of the Southeastern Film Critic's Association (SEFCA). He is a film and television critic based in Tampa, Florida. He's also the Senior Editor here at Upcomingdiscs. Gino started reviewing films in the early 1990's as a segment of his local television show Focus. He's an award-winning recording artist for Omega Records. Gino is currently working on his 8th album Merchants & Mercenaries. Gino took over Upcomingdiscs Dec 1, 2008. He works out of a home theater he calls The Reel World. Favorite films: The Godfather, The Godfather Part II, The Body Snatcher (Val Lewton film with Karloff and Lugosi, not the pod people film), Unforgiven, Gladiator, The Lion King, Jaws, Son Of Frankenstein, The Good, The Bad And The Ugly, and Monsters, Inc.
Wild Card (Blu-ray) Walker Texas Ranger: Flashback