Posted in: Disc Reviews by Brent Lorentson on April 7th, 2015 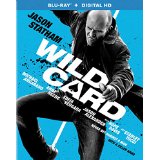 When it comes to screenwriters in the industry, William Goldman is virtually the king of the written word.  From writing such hits as Marathon Man and All The President’s Men to The Princess Bride, Goldman will always be a legend in Hollywood even if it has been a while since his last successful original work.  Wild Card is a remake of the Burt Reynolds version of Heat back in 1986.  It’s been a few decades since watching the film, so instead of trying to remember anything from it how about I just stick to this stylized version?

Nick Wild (Jason Statham) is a guy who doesn’t mind helping you out so long as you pay him for his time.  He’s somewhere between a bodyguard and your best friend depending on what the situation calls for.  When we first meet him, we see him taking a beating from a schlub that is looking to impress a woman; we know Nick is taking the fall, and when he takes the punches it’s hard to not think that Nick takes a sick bit of pleasure from these hits, but what it comes down to is getting paid.

It’s Nick’s kindness and attraction to violence that gets him caught up with Holly (Dominik Garcia-Lorido), a working girl who is dumped off outside an ER after being raped and nearly beaten to death.  Already you’re thinking you have this story figured out and that the rest of the film is Statham breaking bones to all those involved in his friend’s beating…But there really is so much more going on here.  Instead, what we get is a character story that takes our hero from one moment to the next and goes directions that are just not expected.

Statham finally gets a chance to do some acting rather than just be the heavy.  We see a man with dreams, a man who is haunted by his gambling addictions, but mostly it is a journey about a man that is confronting himself.  When we see Nick enter a casino to spend his share of $50,000, it’s a sequence where you want to keep rooting for him, but of course for a guy like Nick a hot streak can only last so long and the inevitable consequences of his actions earlier in the film will of course catch up to him.

The film also boasts a cast that only brings class to this film.  From Stanley Tucci playing a compassionate crime boss, to Hope Davis playing a concerned card dealer who wants to look out for her friend Nick, to Milo Ventimiglia as a wannabe hard-ass crime boss, every character has their purpose and makes an impact on this story.  It’s a film that very much feels like a throwback to another time, where instead of the focus being on the action, instead the most memorable moments are the interactions we see with the characters and their snappy dialog.

Director Simon West has had a bit of a rocky career ever since he did Con Air (1997), but with Wild Card personally I feel this is his best work.  Removing the bloated budgets and given a great script, we get to see the talent shine in front as well as behind the camera.  This is a film that delves into greed and ego and how the two can easily corrupt a person and cloud their judgment.  West could have phoned it in, but instead we get a film that has more grit and character than most films in the cinemas. This is the Statham film I’ve been waiting for, and hopefully this will find an audience on DVD and Netflix, because this is worth going all in with.

Wild Card is presented in a 2.40:1 aspect ratio. The 1080p image is arrived at with an AVC MPEG-4 codec at an average of 21 mbps.  Considering Las Vegas is pretty much the city of lights, in this presentation we get a rather bland look at the city.  The night shots are warm and filled with yellow hues, but during the day the color seems to be desaturated.  Though we do get some detail in the close-ups, the color in the image never seems to pop.  While there were no compression issues, the film seems to have a very digital look to it.

The DTS Master Audio 5.1 mix for the most part was a mixed bag for me.  While the fight scenes sounded great with some of the bone-crunching detail, I had an issue with some of the musical tracks that seemed to have a bit of a rumble effect on the bass.  At first I didn’t mind it, but as the film went on it became more distracting.  The dialog, however, is clear, and considering this is a dialog-heavy film, that is a good thing.  I did enjoy some of the ambient noise we got in some of the casino sequences.  While it’s not a bad mix by any means, with the talent involved and their previous work on big-budget blockbusters I did expect a bit more.

Audio Commentary:  Director Simon West does a good job running this commentary on his own, keeping the listener engaged with all the aspects through the process of getting the film done.  I would have loved to have Goldman sitting in and chiming in on the track, but this will have to do.

Script Vignette (5:17) The filmmakers and crew sit around discussing the William Goldman novel Heat and how the remake came to be.  Not nearly as informative as this could have been.

Original Sin: Las Vegas and the characters of Wild Card (16:26) Your standard interviews with the cast and crew discussing the film.  We get a little more insight than what the previous featurette offered but not much.

It also comes with a digital copy of the film.

For those who are sick of Jason Statham doing one film after the next that does little in the way of standing out from his previous films, here is the film that sidesteps from the pack to give us something a peg above the rest.  I’ve been a fan of Statham since his early years working with Guy Ritchie, and in my humble opinion this may be his best American film to date.

Brent Lorentson is a horror writer and film critic based out of Tampa, Florida. With a BA in Digital Film, he co-wrote and co-directed Scavenger Hunt. His short stories have appeared in various horror anthologies. In 2019 his short script Fertile Blood will be a part of the anthology horror film Slumber Party. He is currently working on his first novel A Dark and Secret Place set to be released in late 2019. Favorite Films: Taxi Driver, Fight Club, I Saw the Devil, The Wild Bunch, Dawn of the Dead, A Clockwork Orange, Pulp Fiction, Heathers, The Monster Squad, and High Fidelity.
Fantail MacGyver – The Complete Series