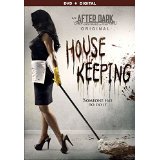 This film did not hold my interest at all. I know, I know…kind of a crude way to start off a review. However, I just don’t see the point in sugarcoating my feelings about this film. I had envisioned a completely different movie in my head before popping the disc into the Blu-ray player, and the idea in my head and what was displayed did not match up in the slightest. Perhaps that is my fault; I know better than to go into a film with expectations. And on that front, I will accept my role in my displeasure with the overall product. However, Housekeeping did nothing to help its case, in my opinion.

The plausibility of the film was a major factor in my inability to connect with the story. A young medical student named Lucy (Adriana Solis) is forced to take on a crap job in order to support a brother in trouble. Okay sound premise, I can get behind this; I have seen many a tale of a responsible sibling being forced to do something they don’t want to do to bail out a sibling whose only talent is making the former’s life more difficult. It’s the delivery that I struggled with.

The main character is forced to clean the house of a resident we don’t see, and before long the audience discovers that there is something off about the employer. First, it starts with normal complaints about not wearing the uniform and performing all duties in the allotted time. I was on board up to this point, but when Lucy discovers a bloody scene and does not call the police, that is when I started to feel this movie and I were veering off on separate courses.

To play devil’s advocate, I mildly understand how the film was able to continue sans police involvement. Most people would rather not stick their neck out and go informing the proper authorities without absolute, undeniable proof that wrongdoing has occurred. Understanding that is what allowed me to continue watching (that and my obligation to complete the movie). But the next time, when she discovered a pile of bloody linen and opted to clean the sheets rather than picking up the phone and punching in those three well-known numbers, it is then that I realized this was not my kind of movie.

As the story went on, it just become more and more difficult to follow. Early on, I had an idea that the entire thing was some type of psychological struggle that the main character was going through, but the overall story still failed to hold my interest. I literally remember having a blank expression at the film’s conclusion because I was confused and lost by how the film chose to end.

Truthfully, I think the film should have gone in a different direction. For one, the story needed additional cast members. The only person we really have contact with is the main character and she barely speaks throughout the film. Most of the dialogue comes from voicemail messages left for her or voiceover from notes. To me dialogue is paramount in any film; communication is what sells the movie. There are plenty of cases where having a character that rarely speaks works well, but this is not one of them. And in the cases where it does work, you need additional cast members that carry the conversation.

In conclusion, I’m sure there is an audience for this film. However, I am not among that audience. To me, if you’re only gonna have one cast member, said cast member needs to have a captivating presence to hold my attention, and that wasn’t the case here. I applaud the effort for trying out something not commonly done, but I feel that Housekeeping missed the mark.

Jeremy Butler is a film school graduate of the International Academy of Design and Technology. He is been writing for Upcomingdiscs since 2012; however, movies have played a big part of his life for much longer. Favorite genres include horror, science fiction/fantasy, and comedy. Favorite movies are V for Vendetta, Boondocks Saints, Kiss Kiss Bang Bang, and The Godfather.
The Missing (Blu-ray) Echoes (Blu-ray)