Posted in: Disc Reviews by Brent Lorentson on April 20th, 2015 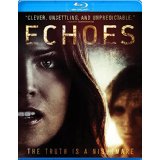 Imagine the horror of being asleep and then suddenly you wake up, paralyzed.  Your eyes flutter frantically about as you struggle to move, but nothing will budge.  From the corner of your eye you see movement.  You’re not alone, and the person who is in the room with you is ready to kill you. This is the hook Echoes attempts to use to suck the viewers in.  As a psychological thriller about sleep paralysis, it’s unfortunate that the only suspense the film manages to deliver on is just when the film will finally come to its painfully boring conclusion.

Anna (Kate French) is a struggling writer working on getting her first screenplay sold. She’s eager to break into the industry and get her script shown to the big Hollywood players, but her agent/boyfriend has second thoughts.  Paul (Steven Brand) decides to take Anna out to his desert retreat where the two can be alone together and where Anna plans to get more writing done.  Only instead of worrying about her script, it’s her intense nightmares that lead to her restless nights.

It’s when Paul is called away for a business meeting leaving Anna alone in the house where things finally have the potential of becoming interesting; unfortunately it simply plods along.  Her nightmares, of course, become a thing we are supposed to question with Anna. Are they only dreams, or is there really someone trying to get into the house to kill her?  By the time the third act comes along with the big reveal as to what is going on, I found myself already wanting to check out on this film.  Perhaps it was the point of the film to succumb its audience into a sleeplike state so we are like the lead character disoriented from plot point to plot point.   This is yet another film where a ghost seems to call upon the living to help solve their murder.

What’s unfortunate is that while the concept is interesting, the execution of the story is simply stale, but on a technical level, this movie looks good.  From a visual standpoint, the execution of the dreams as well as the cinematography and lighting throughout that seems to have some influence from David Fincher.  Along with this technical polish are the simple effects that seem to be a blend of both practical and CGI, in particular a sequence where Anna loses her scarf in the wind and suddenly it catches upon some unseen figure.  Basically that was the only creepy moment of the film.

The film’s undoing is simply that it runs far too long.  This is at best a 20-minute short film stretched over 90 minutes, and the film suffers for this.  It’s a situation where if it was cut down and thrown onto an anthology, this could have been a great short narrative work, but instead it comes off as a bit self-indulgent with nothing unique to say considering the setup is so promising.

Echoes is presented in a 2.40:1 aspect ratio.  The 1080p image is arrived at with an AVC MPEG-4 codec at an average of 24 mbps.  Now, as I mentioned above, I really enjoy the visual style, but when I have to rank it for its visual presentation on the disc, well, at times it is a bit soft.  It is very evident that this was shot in HD, and though there are moments where we get fine detail (mostly before getting to the desert home) a lot of detail seems to be lost as the film progresses.  I’m not expecting to see grains of sand blowing through the air, but with the desert floor I would have expected more texture. Plenty of filters are used, weighing between blues and greens, which slightly affects any natural skin tones as well.  As a high point there is some nice black separation, which is mostly evident in the dream sequences.

The Dolby True HD 5.1 track is very atmospheric and works well in taking us into this waking dream world.  In creating this dream space the speakers are utilized for directional sound that moves around you, which does help immerse the viewer into the film.  The dialog is relatively clear throughout, though really this is not so much a talky film but one that relies more heavily on its ambience.

There are no bonus materials.

While I wanted to like this one, as the story plodded along I seemed to only grow more frustrated with the film.  While I do enjoy the visuals and the overall premise, the film seemed to do a better job at lulling me to slumber-land than terrifying me.

Brent Lorentson is a horror writer and film critic based out of Tampa, Florida. With a BA in Digital Film, he co-wrote and co-directed Scavenger Hunt. His short stories have appeared in various horror anthologies. In 2019 his short script Fertile Blood will be a part of the anthology horror film Slumber Party. He is currently working on his first novel A Dark and Secret Place set to be released in late 2019. Favorite Films: Taxi Driver, Fight Club, I Saw the Devil, The Wild Bunch, Dawn of the Dead, A Clockwork Orange, Pulp Fiction, Heathers, The Monster Squad, and High Fidelity.
Housekeeping John Doe: Vigilante