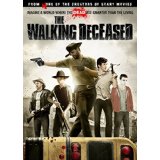 “That’s exactly what a zombie would say.”

It has been some time since I’ve been able to watch a parody film and speak about it fondly afterwards. If memory serves, the last time that occurred was A Haunted House. (The sequel was an obvious money grab.) Now, I wouldn’t quite put The Walking Deceased in the same caliber of that film, but it does manage to deliver enough crowd-pleasing hijinks to entertain.

Pulling aspects from a few of the best films and television series of the zombie genre, The Walking Deceased weaves a tale of the remaining survivors of a zombie apocalypse that occurred as the result of one fast food employee not washing his hands before returning to work. A dim-witted Sheriff and his son (can you guess where these characters come from) bands together with a group of survivors holed up in a derelict shopping mall as they decide to make their way to ranch said to be a safe haven for the unaffected. However, something strange appears to be happening to the zombie population as they begin to behave less like the flesh-hungry mob and more like humans as evident in one zombie that has joined the group in hopes of bedding the group’s beauty.  As the group makes their way to the safe haven, there are plenty of hilarious situations courtesy of the ragtag group of characters embodying beloved characters from The Walking Dead, Book of Eli, Zombieland, and Warm Bodies.

Although somewhat cheesy in the portrayal of some beloved characters, there are several moments of genuine comedy from every member of the cast. There are some characters that stand out more than others, such as Carl/Chris in the beginning of the film. During his introduction he is seen as a weak little boy who can’t even managed to hit the ball off a tee, but his next introduction is what sells the character for me. Though perhaps not ethically right to show a preteen as a cursing, drinking, entrepreneur of a strip club, it does produce a wealth of comedy gems that wouldn’t be possible otherwise. Another entertaining character would be the lone zombie Romeo who follows the survivors. In true fashion of his predecessor, most of his dialog is illustrated through inner monolog, but when we actually hear what he is saying, it actually makes it even funnier.

The other side of the coin, there were a few pointless characters as well, such as the character of Green Bay, clearly meant to serve as a comic relief character; a majority of his scenes depict him as an annoyance to the other characters and likely the audience. His character was simply just too on-the-nose of Columbus (the character from Zombieland that he is based on), and while when Eisenburg was neurotic it was charming, in the case of this actor it’s a poor reproduction of the original. Another character I wasn’t able to get behind would have to be Sheriff Lincoln, albeit one of the main characters of the ensemble, the actor’s overacting is a bit of a mood killer. I will admit that there was at least one scene involving the character right after he exited the hospital that I chuckled at; however, I think that said more about me than it did the character.

In conclusion, as a whole The Walking Deceased is a worthwhile experience if you are looking for a comedy that does not take itself too seriously. I would consider it the type of movie you can watch as a one-time experience with a group of your friends when you all just want a quick laugh. I wouldn’t recommend it for repeated watches; I don’t expect the magic to hold up for repeated use.

Jeremy Butler is a film school graduate of the International Academy of Design and Technology. He is been writing for Upcomingdiscs since 2012; however, movies have played a big part of his life for much longer. Favorite genres include horror, science fiction/fantasy, and comedy. Favorite movies are V for Vendetta, Boondocks Saints, Kiss Kiss Bang Bang, and The Godfather.
Welcome Dan Holland To Upcomingdiscs. The Ides of March: Last Band Standing