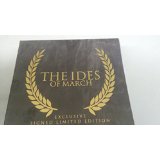 Beware The Ides Of March! For Julius Caesar it was a dire prophesy of death. For Bob Bergland (bass), Mike Borch (drums), Larry Millas (keys/guitars) and Jim Peterik, it was more like a harbinger of 50 years of rock and roll fame. The band started out as the Shon-Dels in Berwyn just outside of Chicago. The name turned out to be a conflict with another group, and it was changed to BattMann And The Boy Wonders. Of course, that didn’t stick, but Bergland’s penchant for paying attention in literature classes led them to The Ides Of March. The lads were only around 15 at the time. Fifty years later, the band is out performing the old hits and still writing new songs.

To be fair, the band wasn’t really together all of that time. Jim Peterik went on to have a pretty strong career with the band Survivor. He was the chief writer in Ides Of March and filled that role in Survivor, penning hits like The Search Is Over and Eye Of The Tiger for a Rocky film. He also wrote hits for the band .38 Special like Hang On Loosely. From the mid 70’s until the early 90’s, Ides Of March was pretty much inactive. Reuniting for a local festival that wanted to pay tribute to them, the band slipped into the old groove and has been touring and recording ever since.

The band’s biggest hit would have to be Vehicle, which has also been used in several commercial campaigns for the likes of Pepsi. While their early sound was an obvious attempt to be the Beatles, they soon added horns and developed a sound closer to that of Chicago. For a band from that era and city it was a pretty solid combination and would provide their trademark for the decades to come.

2014 was their 50th birthday party, and Ides of March Records has put together a present for the fans. The present is a boxed set called Ides Of March Last Band Standing. It’s billed as the Definitive 50 Year Anniversary Collection, and that it is. You get four CD’s that are jam-packed with rare stuff for the fans. There are early demos of some of those 60’s songs. There are B-sides and unreleased tunes. You get several versions of songs like Vehicle including the Pepsi commercial. There are some live bits and, of course, the studio hits themselves. In all you get 80 tracks on those four CD’s. Didn’t I say they were loaded?

The fifth disc is a DVD that qualifies it all for significance at Upcomingdiscs. The DVD contains a 50th Anniversary celebration at Chicago’s House of Blues on May 31, 2014. The concert features the original four founding members and a pretty solid backup band that includes Scott May on the organ, Dave Stahlberg on trombone, Tim Bales on trumpet, and Steve Eisen on sax. The band is tight, and you can tell they’re having a blast.

There’s no question the band has become more about Jim Peterik. He’s the only flashy rocker in the group, and he absolutely loves to talk about himself. If you go to the band’s official web page, he’s the only member mentioned by name in the bio piece and is mentioned several times. I have to admit that he has a kind of used-car-salesman grin. He’s traded on the whole Eye Of The Tiger thing down to the designs on his guitars and clothes. He doesn’t let you forget for a moment that he’s the star. In fairness, he’s a front man, and that’s pretty much his job. At least he doesn’t let the ego get in the way of giving the other members their moments in the concert.

It’s a good show, but I do have a couple of bones to pick. The first has to do with the presentation. The disc does not allow you to simply watch the concert uninterrupted. Each song features a fade to black. Often it’s obvious we missed a song or two. These interruptions also feature a cut to interview clips of the guys giving their take on an upcoming song. That’s golden stuff for fans to have but really needed to be offered as an extra instead of inside the concert. The consequence is you are never allowed to get on any kind of roll with the music. Any momentum the band builds is instantly destroyed after each and every song. I’d like to see Ides of March Records consider re-releasing the concert as a straight out performance. (Maybe on Blu-ray?)

The second issue has to be with the song selection. This also goes back to Peterik’s firm control of the material. Nearly half of the songs are from his writing career with other bands. Now, I understand why they play these on stage. They are obvious crowd pleasers and hit songs to boot. Only this is a special 50th anniversary. The Ides have plenty of material over that time to fill a concert that is supposed to be celebrating their achievements. Instead, again it’s more a celebration of Peterik. Not that he doesn’t deserve any of it, but if there was ever a single show to step back a little, this was the concert to do it.

Otherwise, you get pretty solid stereo sound for a DVD. The mix is pretty solid, and the camera work is well done. The DVD also features plenty of video from the vaults of time. We’re talking visits to American Bandstand and other pop shows of the day. There’s an hour of the four gathering to talk about their start. Here you’ll find some great stuff, and this is where those interruption pieces surely belonged. There’s a music video for the new song Last Band Standing, which serves as a kind of title track to this whole collection. Finally, there’s a nice color booklet with notes from each of the band members and vintage media stuff.

I have to admit that outside of a couple of the bigger hits like Vehicle I wasn’t very familiar with Ides Of March before I attacked this box set. I was far more in tune with the Survivor material, as I suspect are most of you. With that said, I had more than a little fun running this stuff. It’s a ton of material and serves as a nice introduction if you don’t know them and a chest of gems for the long-time fans. Either way, it’s a collection sure to “take you anywhere you wanna go”.

Gino Sassani is a member of the Southeastern Film Critic's Association (SEFCA). He is a film and television critic based in Tampa, Florida. He's also the Senior Editor here at Upcomingdiscs. Gino started reviewing films in the early 1990's as a segment of his local television show Focus. He's an award-winning recording artist for Omega Records. Gino is currently working on his 8th album Merchants & Mercenaries. Gino took over Upcomingdiscs Dec 1, 2008. He works out of a home theater he calls The Reel World. Favorite films: The Godfather, The Godfather Part II, The Body Snatcher (Val Lewton film with Karloff and Lugosi, not the pod people film), Unforgiven, Gladiator, The Lion King, Jaws, Son Of Frankenstein, The Good, The Bad And The Ugly, and Monsters, Inc.
The Walking Deceased Cake (Blu-ray)