Inside Amy Schumer: Seasons One & Two 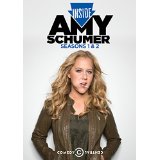 Well, it looks like Comedy Central is still searching for a viable replacement for the loss of The Chappelle Show almost a decade ago. The newest attempt to recapture the former fan base has to be Inside Amy Schumer. I must confess a blissful ignorance to Mrs. Schumer’s rise to fame; I had no knowledge of her existence in recent years, never glimpsing a cameo of her in a television series or movie (or least one that I was aware of), and then all of a sudden it was like she was everywhere. Television, commercials … she even now has made the transition into film with several projects set to be release in the coming year, and my first response to seeing her was, who is Amy Schumer?

More to the point, Inside Amy Schumer is a sketch comedy show geared towards Schumer’s specific brand of comedy, which is, in a word, raunchy. I believe that is the best word to sum up Schumer’s style, as many of the sketches focus on a sexualized point of view; however, in an interesting twist of fate, this time it is the point of view of a woman. I will say that was most likely the most intriguing aspect of the entire series. Her brand of comedy failed to resonate with me; however, I did have an appreciation for the opportunity to peek behind the veil and see an honest female perspective of raunchy ideals. Granted, I’m sure there are plenty of other female comedians out there who could provide the same perspective, but I doubt it would be in the same way as Schumer.

Sketches only make up one portion of the show however; the audience will also bear witness to Schumer doing a bit of standup and interviews with the public in between the sketches. Not to keep bringing up the past, but I can’t deny the slight Chappelle Show vibe I felt during Schumer’s standup portions. Her interactions with the crowd gave me a real throwback to Chappelle’s interaction with the crowd during his show’s reign. Now, whether it was by design, coincidence, or simply paying homage to something that came before it, the connection is undeniable. It is during these sections, with her interaction, that I feel like I got the truest sense of the comedian. Though my laughter was few and far between during the standup, this was probably my favorite part of the show, because it was where I got to see Schumer’s view on things. Standup is about opinion, and this is where I got to know the comedian. Definitely not during the sketches, because that was obviously her portraying a character meant to make the audience laugh; it’s not real.

Some of the subject matter may rub some people the wrong way, with topics like HIV and molestation; however, it is important to remember the context of the comedy. Schumer’s brand of comedy requires a certain mindset for the silly antics and the ability to laugh for laughing’s sake. Her jokes are not likely to leave much of a lasting impression, or at least this was the case for me. In truth, much of the content of the show did not stay with me past the episode I was watching at the time. I can recall one exception: McNutters, which was a restaurant designed to poke fun at a real-life restaurant often dominated by male clientele (I’m sure you can figure out the real restaurant, but please don’t be fooled by the “Mc” or you will miss it entirely.)

In conclusion, the series is not my brand of comedy, but I’m sure that it has a fan base out there given the number of guest stars such as Missy Pyle, Amber Tamblyn, and Chrissy Teigen who were more than happy to appear in episodes. I repeat, it was not for me, but if you are a fan of raunchy comedy, perhaps you may find the series of interest, but I don’t guarantee it.

Jeremy Butler is a film school graduate of the International Academy of Design and Technology. He is been writing for Upcomingdiscs since 2012; however, movies have played a big part of his life for much longer. Favorite genres include horror, science fiction/fantasy, and comedy. Favorite movies are V for Vendetta, Boondocks Saints, Kiss Kiss Bang Bang, and The Godfather.
The Comedian The Simon Wiesenthal Film Collection