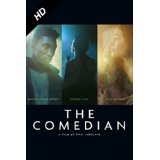 If I were to tell you The Comedian is a dramatic character study, you would expect it to have some comedic elements, right? Unfortunately, that is the exact mindset I entered the film with. While the film does provide characters and concepts, it left me feeling disappointed. Written and directed by Tom Shkolnik, The Comedian tells the story of Ed (Edward Hogg), a middle-aged man who feels himself slipping away at his dead-end job. In order to cope with his unfulfilling lifestyle, he performs stand-up comedy at his local nightclub. One night, Nathan (Nathan Stewart-Jarrett) approaches Ed and praises his performance. The two quickly develop an intimate relationship, livening up Ed’s daily monotony.  Eventually drama unfolds when Ed’s flat-mate Elisa (Elisa Lasowski) confesses her love for him.

Ed is a rather peculiar character. Yes, he has an unfulfilling job, but what really draws you into the character is his standup routine (or lack thereof). You see, Ed seems to be a regular comic at the nightclub, but all he ever does on stage is scream at the top of his lungs. At times people laugh, but more often than not, they stare at him intently, as if listening to a lecturer. That being said, I was looking forward to a character study involving this angry, enigmatic comedian. Unfortunately, the film did not satisfy.

To call this film a “character study” is a little too generous on my part. They did get the “character” part right, but the “study” part was akin to a student with ADD “studying” for a final. There are entirely too many distractions within the narrative. Instead of focusing primarily on Ed, the interesting character that was already established, we are introduced to several others. The filmmaker tries his best to study and develop each of the characters, but it feels as if he bit off a little more than he could chew. As a result, the secondary characters are rather shallow, and the enigmatic Ed remains enigmatic.

In addition to the distracted narrative, cinematography also took away from the film. The film was almost entirely shot with a handheld camera, resulting in quite a few shaky scenes of intimacy, standup, and walking. However, the film does offer some eye candy when it comes to lighting and the overall aesthetics of each set. I also appreciate the editing/pacing, as the film didn’t necessarily drag.

I am a big fan of character studies, but overall, The Comedian was rather disappointing. Despite not really having any comedic elements, Shkolnik started strong with a very interesting character, but didn’t foreground the elements that made him interesting. Instead, we receive a watered-down Ed associating with his even more watered-down friends in a distracted character study. We are probably going to fail our finals.

Avengers : Age of Ultron Inside Amy Schumer: Seasons One & Two