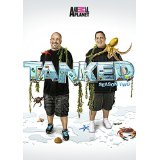 That’s the motto of Wayde King and Brett Raymer of Acrylic Tank Manufacturing (ATM). They are two guys from Brooklyn who moved to Vegas where they started ATM. Why they couldn’t do it in Brooklyn isn’t ever mentioned. Must be the high taxes. The duo claim that they are the number one tank aquarium manufacturers in the United States. That likely doesn’t include the mass-produce guys like All-Glass. Still, from what I’ve seen here, there’s no question these guys are good.

This is another one of those reality company shows run by a quirky family. If you’ve seen Pawn Stars or Duck Dynasty, you know exactly what I mean. Everyone here has a bit of “character” to them that creates the dynamic on the show. Brett is a co-owner who is basically the vision guy. He sells the ideas to the clients and has the enthusiasm that likely drives the big sales. Unfortunately, his mouth writes checks that it falls on others to actually cash. His big shtick is the ability to avoid any of the actual manual labor.

Wayde is the co-owner who is usually shocked by the propositions at first. No question, his looks of “What the hell…” are a staple of the show. Once that’s done, he settles down to solving the problems his partner’s made with his “visions”. He’s the easygoing member of the team who looks and acts serious but is just as playful as the others. He is also married to Brett’s sister Heather, who works in the office.

The staff is rounded out by Brett’s father who is known at ATM as The General. I’m not sure what he actually does at ATM, but he’s most certainly the comic relief here. Robert Christlieb is known as Robbie Redneck. He wears a straw cowboy hat and lives in an RV parked in the company’s parking lot. He’s the guy who does a lot of the grunt work and actually builds most of this stuff. They love to get him wound up and watch him explode.

The real stars of the show are the tanks themselves. Of all of these company shows, this one produces the most Wow with their final results. These guys don’t build fish tanks. We’re talking large and impressive custom creations that are often intended to fit the personality of the company or individual who hires them. While there’s a lot of horseplay here and more than enough filler as they work to complete two jobs an episode, it’s always the end result that makes the show. If you’re into fish and tanks, this stuff will really blow you away. Most of the tanks are salt-water and are always awesome. I’m sure it’s what keeps the viewers coming back for more.

The formula is pretty standard. They visit a client where they spitball ideas. Brett has his “vision”, and the race is on. They manage to show less of the construction than I actually hoped. I suspect they have industry secrets, or the show runners think it would be less interesting. One thing you never hear is the price of the projects. Usually these shows fill you in on the costs of the projects. I suspect the cost is so high that ATM doesn’t want the show revealing that, afraid it might scare of potential clients. They rely on sucking you in with the proposals and hitting you with the cost after they already have you worked up and in love with the idea.

Season two features some nice builds. The things they convert into tanks will surprise you. This season they convert a bus, a pinball machine, and a skateboard ramp. In one episode they must build a tank for a bar that is totally made of ice and kept at 20 degrees. They have to keep the water warm enough for something to survive without it radiating heat and melting the furniture. The guys go with jellyfish, which can live in cooler water and manage to fill the bill. They design and build a KISS tank for a Kiss-themed miniature golf course. They have to pass inspection by the band members themselves. Gene Simmons is a genius marketing guru and manages to market Kiss and/or himself everywhere. Eventually he and Disney will end up splitting up the world between them. One of the most impressive tanks is a huge one built for a church. I don’t know who donates to this particular church, but it took two years to build and obviously cost millions of bucks. I hope these guys don’t pass the collection plate at service.

You get eight episodes on two discs. I’m a little disappointed that a show in its second season with only eight episodes includes two “best of” clip shows. I never saw the first season, so it was all new to me, but not a great value for the fans who collect them all eventually. Overall, there is a lot of fun stuff here. I’m a tank lover personally, so I have to say this is some of the best stuff in this genre I’ve seen. You could even say it’s “unbelievable“.

Gino Sassani is a member of the Southeastern Film Critic's Association (SEFCA). He is a film and television critic based in Tampa, Florida. He's also the Senior Editor here at Upcomingdiscs. Gino started reviewing films in the early 1990's as a segment of his local television show Focus. He's an award-winning recording artist for Omega Records. Gino is currently working on his 8th album Merchants & Mercenaries. Gino took over Upcomingdiscs Dec 1, 2008. He works out of a home theater he calls The Reel World. Favorite films: The Godfather, The Godfather Part II, The Body Snatcher (Val Lewton film with Karloff and Lugosi, not the pod people film), Unforgiven, Gladiator, The Lion King, Jaws, Son Of Frankenstein, The Good, The Bad And The Ugly, and Monsters, Inc.
Unfriended Welcome Dustin P. Anderson To The Upcomingdiscs Team