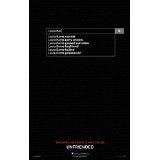 The entirety of this movie is shot from the perspective of our main protagonist’s (Blaire) computer screen. Her friends start a video conference, and they are soon haunted by the memory of their friend who committed suicide due to cyber bullying (and I guess some regular bullying too). Her friends start dying from forced suicide (or suicide from being possessed by a spirit), and they must play this spirit’s game in order to survive. I was pretty excited to see if this movie could accomplish being scary from a bold new way of filmmaking. The budget on this wasn’t very high for a major release title, and in an age where hundreds of millions of dollars is par for the course to spend on a film, that is pretty impressive; however, only impressive if it works. Luckily, this movie works.

Let’s get this out of the way right now. This movie is in no way perfect; there are a few things that come up making it just a couple of hairs short of amazing. The character archetypes are pretty weak, but in comparison to other horror movie characters they were standard. The characters in this are basically copy and pasted from a book called “every horror movie character ever.” I was hoping after Cabin in the Woods came out, horror movies would pay more attention to the characters, but sadly, here I sit. We had the overweight, hacker, joker type. The main protagonist, the jock, the good boy, and the sexually promiscuous type. Not all was lost for the characters; luckily they do kind of play around with the classic horror movie tropes, so the people that you expect to fit certain character designs are switched. That is merely a minor grievance when it comes to this film, and since the thing I love about this movie has to do with character development, it is almost nullified.

The thing that surprised me the most about this film was the storyline. The story here was spot-on for today’s generation. It wasn’t perfect (the haunting from an angry spirit thing is starting to get really old), but with a call to today’s generation, it is as close to perfect as they could get, while still being cliche. The moral of this story is the biggest home-run. This movie tackles cyber bullying above all else, and that is a growing issue for today’s youth, since anyone can be anonymous. Now, there is a movie out there that says cyber-bullying has consequences, albeit you won’t be possessed by a vengeful spirit, but still. If there were more movies out there like this, I feel like the message could come across to today’s youth a little more than it already is.

The biggest question here, as always, is: Was it scary? Actually, yeah, kind of. Look, it takes a lot for a movie to scare me these days, but this movie had some great scary elements. The way it was shot allowed for loading screens to serve as tension builders. Every part of this movie was made well enough to scare the layman horror movie watcher. The ending kind of annoyed me as far as horror endings go, but that is only because I saw it coming. The sound made the movie all the more tense, and the relatability to certain computer problems made the movie hit home. It made the movie feel more real than it was, and that is always what a movie in any genre should aim to do. If you are looking to be scared, there might finally be a movie out there for you.

Normally, I go through the acting at the end, but how badly could teenagers mess up being teenagers? Seriously, if the acting in this turned out bad, I would have no hope for the next generation of actors. So was it good? Sure. They acted like teenagers. No big deal.

Unfriended turned out to be just a few steps short of flawless, and if the creators could have gotten a few minor annoyances under control, this movie would have been genre-defining. Still a pretty amazing piece of work, and definitely worth it for moviegoers to check out, especially if you consider yourself a millennial.