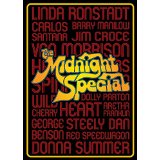 If you were around in 1972, television was a very different place. By midnight most stations were shutting down to the tune of the national anthem. After that there was a test pattern and a high-pitched ring that would fill your screen until dawn when programming would resume. Of course, there were also only three networks, and, if you were lucky enough to live in a large market, a handful of local stations. All good people were expected to be safely tucked into their beds long before 1:00 AM. It was a very different world from today when we get 24-hour programming on over 200 stations or more. Oh, and there was no home video, in case you thought you could just pop in a movie for your late-night viewing pleasure. Video games? Forget it. In just a couple of years, you were going to get Pong.

The music business was also very different in 1972. It was the age of the singer-songwriter and rock bands who actually played instruments. Music was sold on vinyl record albums, and there was no MTV or VH1. If you wanted to see your favorite band perform, you went to a concert. There were dance shows that went all the way back to the 50’s with Dick Clark’s American Bandstand or Soul Train. But these shows featured performances that were lip-synched to the familiar recordings. These were almost never live performances. If you were lucky, your favorite band might show up on Johnny Carson or Ed Sullivan before that. Downloading music meant you worked at a record store, and you were unloading boxes of albums from the back of a delivery truck. Even the Walkman was a decade in the future. Bands just didn’t have access to the fans the way they do today. All of that started to change on August 19, 1972. That was the day The Midnight Special arrived, and things would never be the same again.

I was a young teen in 1972, and throughout the eight years the show was on the air, I fell right smack in the middle of the target audience. It aired at 1:00 AM Friday night/Saturday morning, and staying up to watch was a rite of passage for a kid my age. For the first time we got a close look at the bands we were hearing on the radio. Suddenly these musicians became personalities as well as musicians. We listened to them banter with the show’s host, Wolfman Jack, and with other celebrity hosts. The music was live; the show’s creator, Burt Sugarman, insisted upon that much. If you couldn’t sing the song live, you didn’t get to play on the show. The selection was also quite eclectic. One night you might hear country music star John Denver, folk hero Jim Croce, and rock ‘n’ roll bands like Aerosmith or Ted Nugent. You might hear the soul sounds of Sly & The Family Stone or the instrumental hits from Chuck Mangione. One night there might be Electric Light Orchestra followed by The Miracles. One-hit wonders like Gary Wright and Minnie Riperton were treated like stars, and unknown bands would be given a shot at an international audience. Whatever kind of music you were into, it could be found here. Even if the night didn’t feature any of your favorites, it sure beat hell out of a test pattern, I’ll tell you that.

The Midnight Special plays out like a virtual Who’s Who of 1970’s music scene. The bands were eager to perform for little to no money, because it was their first real opportunity to reach their fans and perhaps create new ones. If you were on the radio in the 1970’s you were on The Midnight Special at some point or another. For a teen like me, this was the soundtrack of our lives. I never forgot sitting up watching the television while everyone else in the house was asleep. Sure, it was mono and a square 19-inch screen. I had to keep it low or catch it from my old man. But there I was every chance I could get. In a clever strategy the TV Guide listings usually didn’t tell you who was going to be on. You had to watch to see if your favorites would make an appearance. God help you if you missed one. You’d hear about it for weeks.

The show featured a small but enthusiastic audience. We used to all wonder how they got in. There were three stages, and they were set up as modular units so they could be formed in odd shapes and sizes to fit the act. Helen Reddy hosted many of them, but it was Wolfman Jack who was the true master of ceremonies here.

Now you don’t have to stay up until 1:00 or worry about missing the best performances. Star Vista and TimeLife have put together a new three-disc collection of the show for your enjoyment. If you remember the show, it’s like a time machine. You younger folks will enjoy laughing at what we had back then. It’s a new 3-disc set.

Here’s what you get:

Jim Croce – Operator (That’s Not The Way It Feels)

Rick Dees And His Cast Of Idiots – Disco Duck

Aretha Franklin – Something He Can Feel

REO Speedwagon – Keep On Lovin’ You

Chalie Daniels Band – The Devel Went Down To Georgia

Steely Dan – Do It Again, Reeling In The Years

Spinners – Could It Be I’m Falling In Love, I’ll Be Around

Natalie Cole – I’ve Got Love On My Mind

Stephen Bishop – On And On

Heart – Crazy On You

Dolly Parton – Jolene, I Will Always Love You

Yvonne Elliman – If I Can’t Have You

Gloria Gaynor – I Will Survive

As if the music were not enough, The Midnight Special also featured comedy acts. I was disappointed that none of these made it to the first collection. Now they’re here on the third disc of the set. We’re talking: Billy Crystal, George Carlin, Freddie Prinze, David Steinberg, Flip Wilson, David Brenner, Steve Martin, Richard Pryor, Gabe Kaplan, Redd Foxx, Jimmie Walker, Robert Klein and Andy Kaufman. Of course these were just short segments of the performances. Most are about 5-10 minutes in length. The disc also features an interview with David Steinberg about doing the show. Other extras on the set include an interview with George Benson about his special gathering on the show. There’s a featurette on Burt Sugarman, the man who started it all. The sound is actually impressive. Honestly, it sounds better here than it did on our 19-inch Zenith in the 1970’s. It is my hope that more of these collections continue to pour out. We’ve all come a long way from those days. But thanks to this release, it’s time to once again “let the Midnight Special shine its ever lovin’ light on me”.

Gino Sassani is a member of the Southeastern Film Critic's Association (SEFCA). He is a film and television critic based in Tampa, Florida. He's also the Senior Editor here at Upcomingdiscs. Gino started reviewing films in the early 1990's as a segment of his local television show Focus. He's an award-winning recording artist for Omega Records. Gino is currently working on his 8th album Merchants & Mercenaries. Gino took over Upcomingdiscs Dec 1, 2008. He works out of a home theater he calls The Reel World. Favorite films: The Godfather, The Godfather Part II, The Body Snatcher (Val Lewton film with Karloff and Lugosi, not the pod people film), Unforgiven, Gladiator, The Lion King, Jaws, Son Of Frankenstein, The Good, The Bad And The Ugly, and Monsters, Inc.
Lost River (Blu-ray) Exclusive Interview With Caroline Palmer From The Drownsman