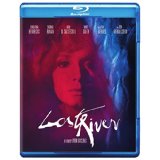 Lost River is the showy, laborious, mystifying feature filmmaking debut of actor/meme machine Ryan Gosling. Unfortunately, you’re more likely to have heard about the intensely negative reaction the movie received when it premiered at Cannes last year, than you are to have actually seen the film. Lost River now arrives on a bare bones Blu-ray that does little to clear up — or enhance — Gosling’s first foray into directing. So we’re left to assume he simply decided to make a movie out of his dream journal.

The plot of Lost River is ostensibly simple. It’s the story of Billy (Christina Hendricks), a single mother who lives in a particularly run-down part of Detroit with her two sons, teenaged Bones (Iain De Caestecker) and toddler Franky (Landyn Stewart). Bones likes to get into abandoned houses and collect interesting scraps. Meanwhile, Billy learns she is in danger of losing her family’s home after meeting with eccentric bank manager Dave (Ben Mendelsohn), who suggests she get a job in town. So far, so normal…except the operative word here is definitely Lost, which is how you’ll likely feel as the story unfolds.

Billy winds up finding work at a bizarre, elegant burlesque club where the audience members enjoy a little blood and dismemberment with their musical numbers. At the same time, Bones has to elude a maniacal thug named Bully (Matt Smith) after taking some scraps from a home that allegedly “belongs” to the criminal. Bones also bonds with a neighbor named Rat (Saoirse Ronan) who has a pet rat named Nick (it’s *that* kind of movie). Rat also tells Bones about a mythical town nearby that was flooded when a reservoir was built, and created a curse on their land. Bones resolves to break the curse by retrieving something from the underwater town and bringing it to the surface.

As someone who watches more movies than the average person, I’m generally a fan of anything that breaks away from monotony. I’m particularly a fan of weirdness; and I haven’t even mentioned Rat’s mute grandma (Barbara Steele), Bully’s lip-less henchman named Face (Torrey Wigfield), or the movie’s apparent pre-occupation with violent animal beheadings.

The problem for me is that Lost River, at best, is weird in a derivative way rather than a way that is interesting on its own merits. There are elements of Stanley Kubrick (particularly anytime Smith’s bully pops up to wreak havoc) and a heavy dose of David Lynch-ian dreamscapes. Heck, Gosling even lifts the latter filmmaker’s freaky nightclub trope for the burlesque club where Billy ends up working. (The club’s star attraction is played by Gosling baby-mama Eva Mendes.) To be fair, Gosling also borrows from filmmakers he has collaborated with himself. Lost River features some of the urban decay in the dramas of Derek Cianfrance (Blue Valentine, The Place Beyond the Pines), but the more obvious influence is the neon nihilism of Nicolas Winding Refn (Drive, Only God Forgives).

At worst, however, Lost River is a tone-deaf, incoherent mess, albeit one from a director who appears to have plenty of storytelling ambition and an interesting eye. (Benoit Debie’s cinematography is a highlight.) It’s hard to get into specifics — not because I’m afraid of spoiling anything, but rather because it would make no sense if you haven’t seen the movie — but the fact that all of the movie’s black characters are jive-talking stereotypes is problematic. (And there’s not even anyone around to translate.) Gosling — who also wrote the script, by the way — tries to make points about class struggles and (maybe) damaging, inconsiderate land development. But those points get drowned out just as thoroughly as the underwater city. Fortunately(?), the movie is too confused — and confusing — to be truly offensive.

The lead actors are mostly asked to alternate between staring ahead in a haze and staring ahead in mild terror. This works better for a performer with an expressive face like Hendricks than it does for De Caestecker, who mostly comes off as an ineffectual James Franco type. Smith is all lunatic id, so Mendelsohn and his charismatic menace wind up stealing the show. The movie snaps out of its haze and comes alive whenever he’s on screen. (Unfortunately, Gosling couldn’t stop himself at just one musical number for bank manager Dave…he had to throw in a gleefully peculiar dance sequence to go with it.)

I’m being hard on this movie because I like Gosling a lot as an actor. I even think he has a future as a director. (Though I’d probably prefer he take a crack at somebody else’s script.) As it stands, Lost River is an intriguing, exceedingly indulgent project that is likely to make you ask, on several occasions, “what’s keeping you here?”

Lost River is presented in an aspect ratio of 2.40:1. The 1080p image is arrived at with an AVC MPEG-4 codec at an average of 21 mbps. The image is softer (intentionally, I imagine) than most modern HD presentations, which gives the proceedings an effective dreamlike effect. (There is, however, some motion blur during a couple of panoramic shots that didn’t appear to be intentional.) That being said, there is some very strong detail on display, particularly whenever Bones is digging around a decrepit house. Black levels are inky and dynamic, which is crucial because a lot of the most visually striking moments take place in a darkened nightclub or during the fiery nighttime finale. Contrast is spot-on, while colors — especially red and blue — also play a key role throughout the film. Luckily, this Warner Bros. Blu-ray gives them the muted richness they deserve.

The DTS-HD Master Audio 5.1 track alternates between the lo-fi tones of older soundtrack cuts like “Deep Purple” (heard over the opening and end credits) and Johnny Jewel’s low-key, insidious score. At times, I wished it backed off a bit and let the action on screen breathe a bit, but the Blu-ray does a great job of picking up seemingly every instrument in Jewel’s arsenal. Then again, music plays a significant part in the film, so it makes sense for it to have a prominent role on the sonic presentation. This track isn’t obviously a show-off piece for your sound system, but it is stealthily effective at immersing the audience in Gosling’s dreamscape. The subs swell whenever the action turns ominous. Dialogue is always clear and well-balanced with everything else going on.

Movies like Lost River are the reason people instinctively roll their eyes when they hear that what their favorite movie star really wants to do is direct.

The total lack of special features on a Blu-ray is certainly disappointing. However, I also kinda respect the notion that this film is being put out there for audiences to decipher without Gosling (or anyone else) holding our hands and telling us what it all means.

That being said, I’d still be interested in seeing what Gosling has to say as a filmmaker. (Especially if he decides not to parrot people he’s already worked with.)