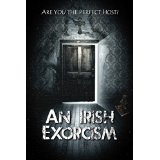 Once more I dive into the deep chasm that is filled with contemporary, independent exorcism films. Reading the title, An Irish Exorcism, what can be expected of this film? I was hoping for the film to bring focus to what it means for an exorcism to be “Irish.” Do Irish Catholics perform exorcisms differently than other Catholics? Is there a world-famous exorcist who travels to Ireland in order to succeed in saving a child’s life, where countless priests have failed? Wherever your imagination takes you after reading the title is a step toward a more creative film. The only thing that sets An Irish Exorcism apart from other cookie-cutter exorcism films is that it is set in Ireland.

An Irish Exorcism tells the story of Lisa (Anna Davis), a college student researching exorcisms, as she pieces together video interviews and other evidence for her final class project. Father Quinn (Paddy C. Courtney), a more progressive priest, helps Lisa get in touch with the more traditional Father Byrne (Brian Fortune) for her project. Father Byrne is reluctant to help, but allows Lisa to document the possession and subsequent exorcism of a local girl in order to finish her project. As you may have guessed, the film is presented to us as “found footage,” complete with an introductory disclaimer stating the “credibility” of the images that follow.

While I am not a fan of found-footage films, especially those involving exorcisms, I found myself engaged throughout the entire film. Perhaps this was the direct result of first-time director David Courtney, who got his start as a cinematographer on multiple documentary projects. I can understand sticking to what you know in your first attempt at something new, and I must say, he definitely achieved the proper aesthetics of a documentary. He did well in crafting a fictional story and disguising it in the documentary’s narrative, as well as achieving a typical documentary’s visual aesthetics. Overall, it wasn’t a bad first film, though I do wonder if his growth as a filmmaker will be stunted by these documentary aesthetics.

I’d say my biggest critique of the film is its overall tone. It didn’t really feel like an exorcism movie. Instead, it felt like an amalgamation of modern ghost movies, taking cues from films like Insidious or The Ring. In terms of the content of the film, the actual exorcism is second-billed to the possession of the girl, to the point that you could extract the exorcism completely and still have a decent ghost movie. Also, Courtney demonstrates the tactic of “less is more” quite well when it comes to the possession. During the intense scenes involving the possessed girl, there are bouts of darkness resulting in “the monster” being seen less. This is always a brilliant tactic for monster movies when it is used properly, and I believe Courtney achieves that here. However, he overuses the trope of the demonic/ghostly presence affecting the camera.  Every time anything involving the presence is happening on screen, the image becomes distorted and they “lose footage.” While I don’t mind that happening once or twice, here it happens close to ten times, where it becomes more annoying than anything.

Overall the film is shot well, and it is engaging. Unfortunately, it just doesn’t carry the charm that would compel me to watch it again. I did not see anything I hadn’t seen before, and simply setting your exorcism film in Ireland does not make it unique by my standards. Despite my consistent engagement with the film, I once again emerge from the aforementioned chasm of modern exorcism films empty-handed, with nothing to show from my endeavors. One day I will find a unique, modern exorcism film, but today was not my day.