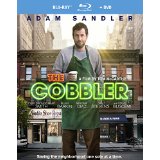 “To truly know a man, you must walk in his shoes.”

On the lone special feature of any substance included on this Blu-ray, director/co-writer Thomas McCarthy admits The Cobbler was inspired by the well-known idiom listed above. I’m all for getting as many original ideas on the big screen as possible. But even if you don’t think basing a feature film on a popular saying is a shaky proposition, The Cobbler severely underwhelms because it totally fails to capitalize on its high-concept premise in an intriguing way.

“You ever wish you were somebody else?”

Max Simkin (Adam Sandler) is the titular sad-sack shoe repairman. He works in an NYC shop that’s been in his family for four generations. Max is bitter about his father (Dustin Hoffman) walking out on him and his mother (Lynn Cohen) years earlier, so he isn’t appalled when a young activist named Carmen (Melonie Diaz) informs him that a greedy developer is looking to snatch up properties — like Max’s shop — on the Lower East Side.

One day, while working on a pair of shoes for an abrasive thug named Leon (Method Man), Max’s equipment breaks and he is forced to use the antique stitching machine in the shop’s basement. Out of boredom, Max tries on Leon’s shoes and discovers that they literally transform him into a new man: he looks and sounds exactly like Leon. Max quickly uses the old stitching machine — a family heirloom — on all the shoes in shop that fit his size 10 1/2 feet and proceeds to step into the outside world to experience life as a new person.

The first 20 or so minutes of The Cobbler aren’t half bad. McCarthy conspicuously opens the film with a close-up of cobblestone (ha!) streets and a 1903 prologue that establishes the magical mythology. And most everything up to Max discovering the machine’s powers — including a silly montage that actually made me laugh out loud when Max finds out what happens when he tries on a dead man’s shoes — was a fun throwback to the sort of comic fantasies Jerry Lewis made in the 1950s and ‘60s (and that made Jim Carrey a star in the 90s).

The problems arise when Max ventures into the outside world with his new identities, and it becomes clear McCarthy and company didn’t fully flesh out their high concept. I’m not even talking about obvious sight gags like Max morphing into a cross-dresser or visiting Chinatown as an Asian guy. (As if you’re required to be Asian to go to Chinatown.) This is an Adam Sandler movie, after all, so obvious sight gags kinda come with the territory. Given the film’s premise, McCarthy could basically have Max go anywhere and become almost anybody. And that’s why it’s disappointing that the best these filmmakers could come up with was having him step in for a dapper English DJ (Dan Stevens) an perv on the DJ’s hot model girlfriend in the shower. It’s especially disappointing when you consider that, up to this point, actor-turned-filmmaker McCarthy has made thoughtful comic dramas like The Station Agent, The Visitor, and Win-Win.

The worst of it comes during the interminable interlude where Max assumes Leon’s identity for truly idiotic reasons. What had been a whimsical, relatively harmless comedy up to that point ends up with a guy bleeding to death on a carpet. It’s a jarring tonal shift, and the movie never recovers from it. Max spends the rest of the movie alternating between dodging violent thugs and hatching a jaunty scheme to take down the local slumlord (Ellen Barkin). As a result, even when the movie reaches for heartfelt sentimentality — Max dons a particular pair of shoes to fulfill his mom’s dream — it feels totally phony and off-kilter. (There’s a pretty convenient resolution to a problem that might have popped up after his mom’s dream date.)

I know it’s (especially) fashionable to pile on Sandler these days — don’t look at me; I’m one of the few people who kinda liked Blended — but he’s not the problem here. Sandler’s knack for taking on “serious” roles is well documented (Spanglish, Reign Over Me, Punch-Drunk Love), but The Cobbler doesn’t quite fall in that category. In fact, I could probably make the case that his star power is underused given that when he’s not moping around during the early part of the film, he’s transforming into a handful of other actors. Out of the supporting cast, Method Man gets the most screen time and is actually a pretty impressive jerk. The rapper/actor also does a nice job softening his screen persona whenever he has to play “Max-as-Leon.” Diaz is a lively performer, but is stuck playing your garden variety Manic Pixie Dream Girl.

Steve Buscemi (a veteran of Sandler films) pops up as the protective owner of the neighboring barbershop, and is a pleasing presence throughout. The same is true of Hoffman during his brief screen time. Barkin, on the other hand, is stuck playing a cartoonish villain that belongs in a different movie from the one people like Buscemi and Hoffman are acting in.

And that’s the problem with The Cobbler. (Well that, and the fact that my movie-watching companion guessed the final-act twist about 30 minutes before it happened.) It seems like McCarthy had a neat idea for a movie, but didn’t think it all the way through. There appears to have been *way* more thought put into the mechanics of the transformation — mirror tricks, nifty editing, and Max’s tell-tale red striped scarf — than into coming up with halfway interesting (or funny, or exciting) things for him to do once he turned into other people.

The Cobbler is presented in an aspect ratio of 1.85:1. The 1080p image is arrived at with an AVC MPEG-4 codec at an average of 21 mbps. Cinematographer Mott Hupfel employs a relatively naturalistic presentation — resisting the chilly palette many NYC-set movies go for — that favors warm flesh tones. There’s also an impressive amount of detail during the opening credit montage that shows Max’s shoe repair skills up close. The lone deviation is that 1903, candle-lit prologue that has very nice separation among its black levels. That separation doesn’t totally carry through to the contemporary nighttime scenes. Overall, this is a clean, blemish-free image that may not be eye-popping, but is a pleasing visual experience nonetheless.

The DTS-HD Master Audio 5.1 track is, like most comedies, dialogue-heavy. That part of the presentation is spot-on throughout. The Cobbler was also filmed on location in NYC, and the surround sound field is constantly alive with traffic and other city noises. (There’s a subtle moment early on where Max and Carmen step out of the shop and onto the street that displays change in ambient noise level through the rears.) The subs quietly rumble to life whenever the jazzier parts of John Debney and Nick Urata’s lighthearted score take center stage.

The Making of The Cobbler: (15:03) An above average “Making Of” with the cast and crew saying very complimentary things about each other and the script. (I highlighted one pretty interesting bit at the top of this review, and I’ll mention another during my Final Thoughts.) Also covers filming in NYC.

The Cobbler is a silly idea for a comic fantasy that is unfortunately followed to its illogical, tedious, unfunny conclusion. I can’t really recommend this as a “babysitter flick” for kids — unless you want to explain to a 5-year-old about neck stabbings — and I wouldn’t even really recommend for fans of Sandler’s usual comedic stylings.

In the “Making of”, McCarthy, co-writer Paul Sado, and others struggle to decide whether they made a comedy or a drama. Unfortunately, that confusion is evident throughout the entire film.

Exclusive Interview With Caroline Palmer From The Drownsman An Irish Exorcism