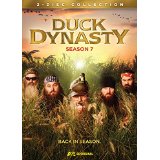 “Meet the Robertson clan. They turned duck calls into a multi-million dollar empire.  But running a family business is tough when the family just wants to run wild.”

The Robertson family is quickly becoming the most recognizable family on TV, considering they are flooding the stores with their books, DVD’s, and many other products you can find at Wal-Mart.  I can’t help but think this is a family that is doing everything right, and good for them for the success they’ve managed. Seeing a positive reality show is refreshing, and the fact that it’s not filled with backstabbing and manipulation just allows it to stand out from everything else.  Every episode continues to try to deliver some life lesson or attempt to show the value of a wholesome family environment.  Is it hard to relate because we’re following a multi-million dollar family?  Surprisingly, this might be the most relatable family to hit the TV screen.

But getting to the heart of the show, what makes this show work is how well this family seems to pull together for good times and bad.  Sure, people can hate on the show because people just have a problem with the Robertsons and their beliefs, but what you can’t take from them is that they genuinely care for one another.  To glimpse into the lives of others while we can sit in the comfort of our homes as we watch the drama or silly antics unfold where we can connect or simply see things we can’t imagine happening with our families is the appeal of reality television.

Overall I can’t say this is groundbreaking television, but for what it is I had a good time with it, and it was never boring, which is always a good thing.  Sure, a lot of this is staged, but considering most of the time the guys are moving through the woods with guns and explosives, perhaps a little staging in the name of safety is a good thing.  But for those who are tired of the reality shows that seem to thrive off characters simply fighting or bed-hopping, Duck Dynasty is a breath of fresh air.

As season 7 begins the family is headed to Scotland to dig into their family roots. That episode leads right into the show’s holiday episode where the family take to the local television airwaves to present their own segments on the holidays. From there it’s “start your engines”…or maybe “hold your horse”. Willie gets to feel what it’s like to own a thoroughbred. It’s off to the races for the clan. Next up the clan shows their huge hearts when one of their employees finds himself in need. You can criticize this bunch all you want over their Christian beliefs. They practice what they preach and wouldn’t think of leaving a neighbor down on his luck.

Other episodes feature Willie bragging that he could outrun a truck, a chicken-coop renovation for the ages, Willie coaching football, dog obedience class and a redneck auction for a housewarming gift. In other words, it’s Duck Dynasty to its core. In the end though the show continues to deliver some good laughs and some fun life lessons the entire family can enjoy.  This isn’t the show that could take me away from Breaking Bad or Under the Dome, but it’s still something worth giving a shot when you have some empty space on the DVR or simply want some fun, light entertainment.  For me this is a guilty pleasure that I can’t help but look forward to see what shenanigans the family gets into next.