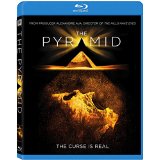 If nothing else, The Pyramid has an intriguing premise. A father-daughter archaeologist team discovers an unusual, three-sided pyramid buried 600 feet underground that might even predate the ancient Egyptians. Essentially, this is Ancient Aliens as a found-footage horror film. Yes…unfortunately, I said “found footage,” a cinematic device that now feels even more decrepit than your garden variety mummy. So while the film’s opening act probably got people like this guy extremely excited, the movie falls apart the deeper the characters descend into the titular pyramid.

Miles Holden (Denis O’Hare) is a patient, old-school archaeologist, while his daughter Nora (Ashley Hinshaw) is more excitable and has been quicker to embrace new tools like satellite technology in her work. Together, they have made what is potentially the find of the century: an ancient pyramid buried deep beneath the desert in Egypt. A documentary film crew — journalist Sunni (Crista Nicola) and camera guy Fitzie (James Buckley) — arrives to capture the Holdens’ discovery.

The Pyramid is set in 2013, which is the same time as some of the Egypt’s real-life protests. This detail is only significant for horror movie/plot point reasons that force the characters into making a very dumb decision. After the Holdens are told they’ll have to evacuate the archaeological site due to the country’s political instability, they decide to stay behind a little longer and send their very expensive rover robot named Shorty into the pyramid to have a quick look-see. When the $3 million rover is damaged by a mysterious creature — much to the chagrin of its operator/Nora love interest Zahir (Amir K) — the group decides to enter the pyramid to retrieve it and find out what happened. It’s no spoiler alert to tell you that not all of them come back out.

The characters (overprotective dad, wisecracking camera guy) are all paper thin, but the performers don’t exactly do much to elevate the film. (O’Hare is a really good actor, but has little to do here but fret.) The Pyramid is the directorial debut of Gregory Levasseur, a writer/producer who has worked on 21st century horror flicks like P2, Mirrors, and The Hills Have Eyes remake. He is also a frequent collaborator of director Alexandre Aja, who is touted as a producer on this film’s Blu-ray cover. Aja directed Mirrors and the effectively nasty Hills Have Eyes remake, so it’s not surprising that the camera tends to linger on some of the more graphic deaths in The Pyramid. (One poor soul is impaled on a spike, fed on by cannibalistic scavengers, and *still* doesn’t die right away!)

Speaking of the camera, I should point out The Pyramid actually employs a mixture of found footage and a more conventional cinematic presentation. (With a heavy emphasis on the former.) I don’t actually hate found footage movies on principle — I’ve enjoyed the Paranormal Activity series long after everyone else stopped caring — but when filmmakers don’t fully commit to the conceit, it makes me feel like even they don’t have total confidence in the storytelling tool they’ve chosen.

Ordinarily, the loudest complaints you’ll hear about found footage movies is that the shaky camera makes audiences nauseous (fortunately never an issue for me) and that they stretch credulity. (“Just drop the stupid camera and run!” says everyone with common sense.) With The Pyramid, my biggest complaint is that the filmmakers have taken what should be unique and wondrous setting…and reduced it to a bunch of ill-fated fools bumbling around in the dark and who are periodically jolted by jump scares.

Except for the hieroglyphics on the wall, this allegedly momentous pyramid really looks no different than something like the sewers/catacombs of As Above, So Below. Then again, when camera *does* stop moving long enough to give us a clear look at the mythological CGI Big Bad stomping around The Pyramid, you’ll probably wish the filmmakers had kept you in the dark.

The Pyramid is presented in an aspect ratio of 2.35:1. The 1080p image is arrived at with an AVC MPEG-4 codec at an average of 36 mbps. Not surprisingly, a good portion of the film lives in the shadows and darkness of the underground pyramid. And, to be fair, this is the part of the film where the occasional use of more cinematic cameras and techniques were a net positive. Separation and shadow definition are quite strong, but there’s not a very high amount of fine detail once the action moves underground. (Which is understandable, given the darkness and lower-tech footage being simulated.) The first portion of the film, however, features a clean, almost blindingly-bright palette that makes the ensuing darkness even more oppressive. Overall, the visual presentation on this Fox Blu-ray is sleeker and a step above what you’ll find in most found-footage films.

The DTS-HD Master Audio 5.1 track arguably does a better job of ramping up tension than the movie’s script. Dialogue is kept up front while the rears are occupied by subtle background noises — whooshing wind in the distance; skittering footsteps — that convincingly immerse you in the film’s perilous underground setting. Fidelity is spot on, while subs help punctuate the jump scares and make the plodding footsteps of the pyramid’s monster sound more foreboding. Thanks in part to this track, the horror in this film sounds scarier than it looks.

Extended Ending: (1:06) This brief tag can also be found after the end credits have finished scrolling. It also has the audacity to hint at a possible sequel.

Promotional Featurettes: Each of these four mini-docs are less than three minutes long and are largely skippable. There is no Play All option.

Space Archaeology (2:11) Examines the use of newer satellite technology to dig for very old materials. Both this featurette and the film itself would’ve benefited from a stronger emphasis on this stuff.

Egyptian Myth: (2:14) Cast and crew talk about their fascination with Egyptian society and how it attracted them to this project.

The movie features sand traps and “sphinx cats,” but takes itself too seriously to deliver campy thrills. Unfortunately, the movie is also too rote and disjointed to deliver legitimate scares.

Despite an interesting premise and a couple of effective kills, I can’t really recommend you take a trip into The Pyramid.