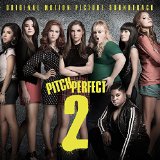 We all love underdogs. Even if we think we’re the greatest thing since chipped beef on toast, secretly we think we’re the underdog.  No matter how great our life is, we don’t think it’s good enough, and everyone’s out to get us. Pitch Perfect was a movie about underdogs, and it was an underdog itself. It was a movie about women, nerds and dorks. Just in case you think I’m being insulting, I actually think all three of those things are great, but they are not always given the respect they deserve. The first movie was thrown out in the marketplace with the expectation that it would starve and die. Instead it did very respectable business which only grew when it went to the home viewing audience. Pitch Perfect made $65 million, and now Pitch Perfect 2 has made over $70 million in it’s first weekend. The sequel only cost $29 million to make. The characters in the movie are still underdogs, but clearly the producers of the movie are not.

So what’s all the excitement about? Nothing much. Just an underdog story about a bunch of girls and their sometimes dopey boyfriends. They are an a capella singing group in college that fought their way to a championship only to lose it in the beginning of the second movie with a massive fail wardrobe malfunction. The story isn’t too much different than the first. Just more of the same. They have to fight their way back from disgrace and failure. We can all identify with that.

The hero of our story is Becca (Anna Kendrick). Kendrick is getting a reputation as a singer, which she also demonstrated in Into The Woods and The Next Five Years. She becomes the reluctant leader of “The Barden Bellas”, and even though Becca wants to move on, she finds her self in the leader role again. The “Bellas” are closely associated with “the Treblemakers”, the male version of their group, which includes some of their sometime boyfriends. Everyone in both groups are kind of stereotypical losers in some way or another with the potential to be winners. Again, we can all identify with that. We’ve seen this type of story in so many variations. What makes this more fun than a lot of other movies is lots of Glee-like singing and entertaining musical mash-ups. I do enjoy the singing. There is also a heavy emphasis on comedy, more than in similar movies about competitive cheerleading, or dancing, or stomping, or whatever.

Some of their competition in the singing department are Das Sound Machine and the Green Bay Packers. The “Bellas” have been one slim chance of redeeming their reputation. They must go to Copenhagen (which nobody seems to know is in the country of Denmark) and win the world competition. They were blackballed by the head of the Acapella organization headed by Elizabeth Banks (Hunger Games) who also directed this version. There is a loophole which allows them to compete once every four years in the world competition. I really don’t have to tell you more, because if you’re reading this you are probably already a fan and went on opening day.

Rebel Wilson (Fat Amy) and new edition Hailee Steinfeld (Emily Junk) (Ender’s Game, 3 Days To Kill,True Grit) handle most of the story elements that are new. Fat Amy tries to deal with her relationship with Bumper Allen (Adam Devine), and Junk is being ineptly courted by Benji Applebaum (Ben Platt). Becca is trying to juggle an internship at a music company run by the tall, bald member of Key and Peele. We also have a butch African-American lesbian, a soft talking psychotic Asian, and a fatalistic, pessimistic Latina. In other words, it’s all just silly.

Pitch Perfect and Pitch Perfect 2 have definitely appealed to the underdog in us all. The movie is something of a shaggy dog as well. I don’t think anyone tried to pretty this movie up much. It is what it is. Sit back and enjoy the music.