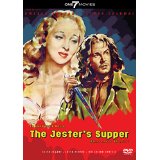 La cena delle beffe, or The Jester’s Supper (1942), is an Italian period drama that was produced in Cinecittà (Cinema City). Before WWII and its aftermath, Italy’s film industry was more like what you would see in Hollywood during the same time. Spanning from the 1930’s to the early 1940’s, this movement was characterized by light comedies and historical films. The Jester’s Supper is no exception, telling a tale of a love triangle, vengeance, and madness. Directed by Alessandro Blasetti, The Jester’s Supper follows the drama between Neri (Amedeo Nazzari), Giannetto (Osvaldo Valenti), Ginevra (Clara Calamai), and their love affair. Gianetto and Neri are rivals who compete for the love of the beautiful Ginevra, but when Neri succeeds in taking Ginevra for his own, Gianetto finds a new love in vengeance. Swearing to win Ginevra back, Gianetto develops a plot to frame Neri as a madman so he will be incarcerated, leaving Ginevra to himself. Ridden with guilt, Gianetto releases Neri, prompting Neri to seek his own revenge.

If you watch this movie for nothing else, it has to be for Amedeo Nazzari’s acting. Known to Italy primarily as a hero, Nazzari is cast in a role of a villainous, arrogant playboy with many friends and thugs. While this casting may be against his typical roles, he stops at nothing to deliver his best performance. Though falsely accused of being mad at first, slowly throughout the film you watch him sink into an actual madness. The range of emotion that Nazzari is able to portray is incredible: Arrogance, anger, sadness, defeat, and madness. Nazzari’s presence took me by surprise, much like Toshiro Mifune’s did when I first watched Rashomon years ago. I’d go as far as to say that Mifune watched The Jester’s Supper in addition to the behavior of lions to prepare for his iconic role in 1950’s Rashomon.

In addition to Amedeo Nazzari’s wonderful acting, the film’s set design is such a treat to look at. Being filmed in Cinecittà, Blasetti had multiple sets at his disposal, but these sets spared no details. Each wall, door, bar, bourgeois bedroom, and costume looked authentic. Typically when I watch older films I appreciate the fact that set design has come a long way since the 40’s, but in this case, it fooled me. Though I’m more acquainted with the beautiful Neorealist films of Italy after the war, The Jester’s Supper is evidence that Italian films have always looked beautiful.

I must say though, that a combination of fast-paced dialog and slow-moving storyline almost lost me. Perhaps these were the reasons that I paid such close attention to Nazzari and the set design. Given that I don’t speak Italian, it was very hard to keep up with the subtitles in this film. Each character spoke extremely fast, and they talked over one another multiple times. I eventually adjusted, but it is very easy to lose your place near the beginning. Finally, the slow moving story isn’t too much of an issue, but the story’s content is nothing unfamiliar to anyone: a love triangle gone awry. However, the narrative pays off with a brilliant twist ending I was not expecting, and I believe it is too good to give away. If you are able to adjust quickly to the fast-paced dialog (or can speak Italian), I recommend this movie for the acting, the sets, and the fantastic conclusion.

Contest: Win See You in Valhalla From ARC Entertainment Welcome to Sweden: Season 1