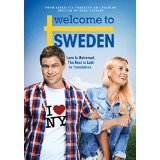 “You move to Sweden…you have no friends, you don’t speak the language, and you don’t have a job.”

If you think that potentially disastrous scenario sounds like the set up for a sitcom…you’re mostly right. On one hand, that is indeed the exact logline for Welcome to Sweden, a comedy set and produced in the titular country that eventually found its way to NBC. However, the impulsive move to Sweden also happens to be based on the real-life experiences of creator/star Greg Poehler.

Bruce Evans (Poehler) is a highly-successful accountant to the stars in NYC. However, he decides to leave all that behind to follow his Swedish girlfriend Emma Wiik (Josephine Bornebusch) back to her home country. Bruce and Emma initially go to live with her family. The Wiik family is comprised of therapist mom Viveka (Lena Olin), who is always criticizing and psychoanalyzing her daughter; affable dad Birger (Claes Mansson), who cares about renovating the summer house a little too much; deadbeat brother Gustaf (Christopher Wagelin), a wannabe entrepreneur who still lives at home; and USA-loving uncle Bengt (Per Svensson), who owns a video store — because apparently they’ve yet to go out of style in Sweden — and speaks mostly in movie quotes.

In real-life, Poehler was an NYC lawyer when he decided to follow his Swedish girlfriend (now wife) back home. Eventually, he practiced law in Sweden up until a few years ago, when he began pursuing a career in comedy. Evidently, it runs in the family: his older sister is Parks and Recreation star Amy Poehler. When Greg left his day job to create a show based on his experiences, Amy agreed to produce, and I assume she played a large role in eventually getting Welcome to Sweden on NBC.

It’s also safe to assume she’s the biggest reason the show was able to convince guest stars like Will Ferrell, Gene Simmons, Malin Ackerman, and Parks co-star Aubrey Plaza to appear during the 10-episode first season as themselves. (Amy also guests in multiple episodes as — hopefully — an awful version of herself.) I understand the reason behind this kind of stunt casting — star power gets projects off the ground — but the celebrity bits are easily the worst part of Welcome to Sweden.

In particular, there’s a recurring storyline where Amy and Aubrey hatch a malicious, destructive scheme to get Bruce to return to the U.S. The joke is supposed to be that these spoiled stars are helpless without the underlings (like Bruce) who work for them, but it ends up souring what is otherwise a rather genial sitcom. (And it stretches credulity that this many famous people would so desperately need *this* particular accountant.) As a result, I enjoyed the Ferrell and Simmons guests spots the most because they were the briefest. (And in case you’re wondering, the obligatory ABBA guest spot doesn’t occur until Ep. 7.)

Besides the celebrity nonsense, Welcome to Sweden is your typical fish-out-water comedy, only this one provides a refreshing change of scenery for American audiences. Obviously, most comedies that air in America are produced in the USA — or are British imports — so I enjoyed seeing stories set in a place I hadn’t already seen dozens of times. Since the show is told from Poehler’s perspective, there is plenty of comedy mined from Swedish societal customs. (Apparently, Swedes really like to keep to themselves when they’re out in public, and the government is pretty willing to just hand out jobs.) The jokes, however, are good-natured and Poehler clearly has a great deal of affection for his adopted country, as evidenced by a late-season storyline where he returns to the U.S. only to discover how much of a Swede he’s become.

This is Poehler’s first noteworthy acting job, and it often shows. Obviously, playing a fictionalized version of yourself isn’t the same as doing Shakespeare, but he occasionally lacks the charm and presence required to carry a show. Simply put, Bruce can be a whiny, ineffectual brat at times, and Poehler isn’t strong or compelling enough of a performer to keep us invested in him. Fortunately, Poehler is also smart enough to surround himself with an appealing cast. Bornebusch brings wit and layers of insecurity to the stock role of Wife Who Is WAAAAY Out Of Her Husband’s League. (A tradition that at least dates back to Fred and Wilma.) And it’s fun to see Olin — one of Sweden’s most accomplished and famous exports — having fun as the biting, vivacious Viveka. I also enjoy Svensson as Uncle Bengt, but it’s probably smart to only have that character recur since his movie-line shtick could grate in a hurry.

Welcome to Sweden: Season 1 features all 10 episodes on two discs. The show originally aired in Sweden before a more sanitized version — no F-words, no sauna-related male nudity — made it onto NBC’s air. This set from Entertainment One doesn’t have any special features, but it does offer the original uncensored episodes. Season 2 has already premiered in Sweden and is set to air in the U.S. in July. I’m curious to see where the show goes now that Poehler has some acting experience (and if they decide to cut down — or double down — on the celeb cameos).