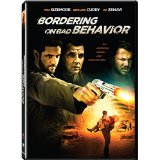 How do you create world peace? Well, according to Bordering on Bad Behavior, you take representatives from three countries and lock them in a room together for six hours with unlimited booze and marijuana. I recognize half of you who see this as a ridiculous idea; however, I know that there are plenty of you who have likely considered this as an option (maybe not the booze and weed part, but the isolation for sure). Well, if you want to know if the idea has any real traction as an option, this movie is your opportunity to see, because despite being crude and possibly offensive in some areas, it speaks some real truth.

So here’s how it starts: Bob (Tom Sizemore) is a member of a United States Army unit posted at a top secret communication outpost in Israel. After years of service, he is disillusioned by the experience, although he does maintain his strong patriotism and love for country. Now a mere 24 hours away from completing his assignment and returning to his unit, he simply plans to kick back and get drunk. Enter Ari, a newly assigned member of the Israeli Special Forces now working at the communication outpost. From the very second they meet, the two are instantly antagonistic to one another. For Ari, Bob represents all the traits he despises about the opposing country; laziness, involving himself in the matters that don’t concern them, and arrogance. For Bob, Ari has a chip on his shoulder and something to prove.

The two resolve themselves to silent disdain for the next 24 hours until Bob leaves, but that plan is ruined when Baz, a Lebanese solider, accidently walks into the outpost and triggers an emergency lockdown. Now, I know what you are thinking, the chances of an enemy soldier simply accidently walking into a top secret communication outpost is not probable, and you would be right; however, the outpost is disguised as a house, and Baz is merely visiting family in Israel and walks into the wrong house.

Now this is when the s&*! hits the fan. The three are trapped in the room together for the next six hours with reinforcements on the way who will likely shoot first and ask questions later. With no other choice, the three enemies must endure one another, and they do not do that silently this time. Truths come out, opinions are shared, and blows are thrown. However, during this time is where the movie really hits its stride.

In my opinion, this film deserved a much wider release. As I said in the beginning, though crude and offensive in some areas, there is no mistaking the amount of truth that is spoken in this film. It quite literally changed my perspective on international relations. I’m not sure how much of everything the characters were saying was historically accurate (I will be checking), but the amount of passion that each character brought to their argument was enough to at the very least get you to see their perspective. During the movie, we learn that a lot of the character’s problems with one another were due to a generalization of an entire race based on the actions of a few lone individuals. I know that sounds simple, but through flashbacks you do learn the reason behind two of the characters’ hostility.  There is no flashback for the third character, which is probably my only real complaint. I would have rather enjoyed seeing that character’s motivations behind his opinions, and for those wondering, yes, I am avoiding naming characters to preserve the integrity of the movie.

Does the film get crude and offensive in some areas? Yes; however, it is mainly in the beginning of the film. Given that these characters are enemies, name-calling is expected. I urge people to look past that and see the good in the film, because I honestly believe that if you watch it, you will gain a new perspective. I’m not guaranteeing a change in your opinions, just merely a window into the views of other people. I doubted this movie when I first popped it in, I can admit that, because this story accomplished a rare feat. As I watched I was only remotely interested, but by the time I was fifteen minutes in, I was fully invested.

Jeremy Butler is a film school graduate of the International Academy of Design and Technology. He is been writing for Upcomingdiscs since 2012; however, movies have played a big part of his life for much longer. Favorite genres include horror, science fiction/fantasy, and comedy. Favorite movies are V for Vendetta, Boondocks Saints, Kiss Kiss Bang Bang, and The Godfather.
Memorial Day Salute ! Major Crimes: Season 3