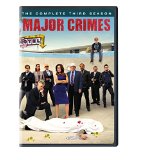 “I have doubts about my sanity, the Kennedy assassination, the moon landing, but this…”

No doubt about it. Major Crimes has managed to do what few shows before it have been able to pull off. Shows have survived the loss of their lead, but the remaining years were usually something lesser than it once was. That’s not the case when The Closer lost its lead actress/character. The title was changed, and with just a few cast tweaks the series returned as Major Crimes, and I dare say it’s a much better show than its predecessor.

Pretty much the rest of The Closer’s cast remains intact. The senior officer on the team is Lt. Provenza (Bailey); he’s still partnered with Lt. Andy Flynn (Denison). It’s a good combination, as both characters spend the season feeling the effects of age. Lt. Tao (Chan) is still one of the tech experts, along with Buzz (Keene), who also serves as the videographer of the unit. Detective Sanchez (Cruz) is back, along with medical examiner Dr. Morales (Del Arco). The unit also includes Kearran Giovanni as Detective Amy Sykes and Nadine Velazquez as the unit’s D.A., Emma Rios. The standout character has to be Lt. Provenza, played by M*A*S*H’s G.W.Bailey. The character is actually a lot like that show’s Rizzo. Just pretend that he finally got out of the Army and got into law enforcement. He’s always complaining and getting into trouble, but he’s smart, and his instincts are often dead on.

If there is a theme to the season, it is certainly family and children. There is no question it was on the minds of this crew during the third season. Perhaps it all starts out with Rusty (Martin) having contact with his mother. She’s in court-ordered rehab, and Raydor tries to treat it as a good thing. Unfortunately, Rusty’s mother becomes quite a disappointment for him as he learns some hard truths on his own. At the same time, Raydor is hoping to officially adopt Rusty. Yes, he’s emancipated and really an adult, but she wants him to know he always has real family. It all hits home during a case where a victim had no one who cared what happened to them. The adoption causes her own internal family issues. Her own kids are not happy, at least at first. It also causes her to finally divorce her estranged hubby (Berenger).

The family/children theme runs through a very large number of the episodic cases. The season begins with one of the more serious and grisly cases. Two young children end up in a couple of suitcases and thrown out on a road. It serves to strike the theme home early and emotionally with the show’s characters. Several cases will involve missing or murdered children. Others will involve family dynamics in one way or another. The writers are hitting the theme hard.

The show continues to have an intensity about it that keeps your attention. We see this particularly with Detective Sanchez. He loses his composure several times during the season. It’ll lead to him being a suspect in one murder and eventually in anger management classes to keep his job. It’s a tough year for a character who also gets shot this season.

The show also always manages to balance the very intense episodes with light episodes that take the time to frolic just a little bit. We see a return of the “Dick Tracy” character in a case involving a dead dog in a Brewster’s Millions kind of send-up. In another light episode we discover that Tao has been pulling in some serious money moonlighting as a technical consultant to a cop show called Badge Of Justice. The show’s on the bubble with some rather clever “inside baseball” ratings jokes. The show’s lead is a bit full of himself and wants to be a part of the investigation when a girl who was stalking him turns up dead. It doesn’t help when the clueless television detective is the prime suspect. The holiday special sports a Santa bank holdup that uses a flashmob of Santas as its escape plan. Plenty of levity along with some of the harshest cases on television. It’s a balance that is so much more evident when you’re watching a full season in short order, as I have here.

The season ends with a two-part finale that brings back Rusty’s old nemesis, Stroh. While Billy Burke hasn’t had as much screen time as the killer, the character has been a huge part of the story. It has become this show’s Red John, and one hopes that with the season finale we might just be able to put that story to bed. It goes back to the days of The Closer, and I pretty much feel like it’s over for me.

There are 19 episodes on four discs. The only extras here are deleted scenes on select episodes and a gag reel. I have to say that I continue to like the show better now. The cast appears to have wonderful chemistry, and it was really always an ensemble effort. This is a rare thing in television. Spin-offs are usually not better than the parent show. If you liked The Closer, you’ll love Major Crimes. “And how often have you run into that before?”

Gino Sassani is a member of the Southeastern Film Critic's Association (SEFCA). He is a film and television critic based in Tampa, Florida. He's also the Senior Editor here at Upcomingdiscs. Gino started reviewing films in the early 1990's as a segment of his local television show Focus. He's an award-winning recording artist for Omega Records. Gino is currently working on his 8th album Merchants & Mercenaries. Gino took over Upcomingdiscs Dec 1, 2008. He works out of a home theater he calls The Reel World. Favorite films: The Godfather, The Godfather Part II, The Body Snatcher (Val Lewton film with Karloff and Lugosi, not the pod people film), Unforgiven, Gladiator, The Lion King, Jaws, Son Of Frankenstein, The Good, The Bad And The Ugly, and Monsters, Inc.
Bordering on Bad Behavior Cut Bank (Blu-ray)