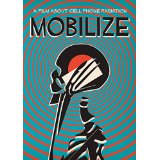 The film Mobilize (previously titled Disconnect) is about the potential dangers of cell phones. People have joked about it for years. The AMC series Better Call Saul had a major plot device about a character’s aversion to any electronic radiation. The character wound up wearing thermal blankets, not going outside, deactivating electricity in the home, and having all electronic units being stored in an outside mailbox. The show never really explained the source of the character’s problem, but it seemed to imply that it was a mental phobia. In fact, there are many people who are showing mental effects such as increased agitation and ADHD. A far more serious problem seems to be a causative effect for brain tumors.

There have also been cases where depending where the phone is normally kept (clipped on a bra or in a pants pocket) of leading to breast cancers and lower sperm counts. The cell phone industry has been actively trying to manage any information regarding the possible harmful effects of radiation from cell towers and cell phones. They have been pretty successful. The simple fact is that there have not been a significant number of independent studies. The studies that have been conducted have been conflicting based on whether or not they have been industry-funded. It is very clear that there might be a problem. The issue is long term effects, and it is just now that people who have been using cell phones heavily for 20 years or more are having problems. Then there is the issue of children using them at young ages and possibly for their entire lifetimes. There are clearly an increasing number of cases of cancers that have been argued are directly related to cell phone use. The U.S. wireless industry is in the range of $200 billion. They have the resources to lobby everyone in the media and politics.

The film is a first-time effort by a young filmmaker who has packed the film with talking heads. One of the best clips is of Richard Branson in November 1999 just before he started Virgin Mobile in which he recommends using a headset to keep the phone away from the head or body. Branson sold off his cell phone business for a couple of billion but continued doing ads (using his headset). It is obvious Branson was aware of the potential danger in 1999. In fact, this seems to be the most consistent bit of advice to consumers. It is included in cell phone manuals, but the industry wants to minimize exposure of potentially harmful information to the consumer by fighting any attempts to highlight the information. You might have detected a hint of sarcasm in my last remark. It was intended.

Parallels have been drawn to the tobacco industry. A clip is included from the film Thank You For Smoking which shows a lobbyist talking to cell phone executives.

There are many more celebrities included in clips, but to be fair, there are far more droning doctors and experts. It is a balanced film, but the balance might be a little swayed to towards a call for alarm. The simple truth is that nobody cares, but everybody suspects there is a problem. It is only when the brain tumors become epidemic that people will start to raise an uproar. The film itself is far from groundbreaking technically. It is an obvious labor of love by one young filmmaker. There should be a lot more films studying the subject.

There is a great need for truly extensive and major independent studies for an industry that is still in its infancy. Do we really want the current crop of infants and toddlers to be the ones who really face the full long-term effects of something that we just really don’t understand? Call your congressman (but use a headset).