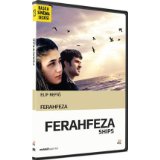 Most of us are used to seeing Hollywood movies. That often bleeds over to British and Australian films, but not everyone wants to see films with subtitles. Still, many foreign films have become popular from France, Spain, Japan, Italy, China, India, Denmark, South Africa and Mexico. Obviously almost every country in the world produces films, but most of us never see them. The sheer abundance of films produced in any given year is mind-boggling. Who sees them all? To some degree, films from one part of the world are mostly watched by people from the same place. Turkish films are mostly watched by Turks.

Ships (Ferahfeza) is a Turkish  film directed by Elif Refig. The story is fairly strange and slow-moving. It takes place in the port district of Kadikoy in the city of Istanbul. Everything about the movie is dull and sad, including the location. Everything about the place begs to be left behind and escaped from. That is what the main character wants to do.

Ali (Ugur Uzunel) is a good-looking sad sack who wanders about listlessly all the time. His father, Raif (Mert Asutay), wants him to pay attention to the export/import business. Ali is distracted by everything, but mostly his dreams. He dreams of one ship in particular called the Vamos. He hopes to find the ship one day and sail away. He is even distracted by pigeon eggs that nest in his office. His father wants him to snap out of it and settle down in a branch office. Ali seems to just want to get away. Eds (M. Sitare Akbas) is a young woman who has a lot of anger. She is mostly angry that her father has returned to her mother after a long absence, wanting everything to be happy once again. She hates her father. She wanders around spray-painting graffiti art and encounters Ali. Ali protects her form an old boyfriend she doesn’t want to see anymore. Ali waits around hoping to see Eds again. At one point he is struck by lightning, which makes his dreams even more vivid in his mind.

Eventually the two alienated young people become attracted to each other. They start to share the dream of running away together. Why they are so alienated by parents who seem to love them is not explained. One day they get on a pickup truck and take off. They are chasing some dream they don’t even understand.

The main reason to see this film is to get a sense of time and place. To go somewhere you will probably never go or want to go to. It is not a pretty resort town. It is a boring port city. There is no place to escape to except to jump a vast empty ocean.

There is an undercurrent of unease and distrust between these two disaffected souls. They seem to want to escape from the dismal expectations of their culture and their parents, but they don’t know where to go. These two people are attractive and smart, but they seem deadened by their options. I don’t know if this film could speak to an American audience because, comparatively our options seem limitless.

There is one problem with the DVD I received. The sound was out of sync, which is not that much of a problem since it is all subtitled anyway. It certainly added to a sense of disconnection. Maybe it was intentional.