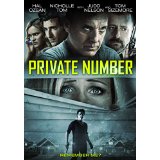 There are few things that are more bothersome than cheap marketing gimmicks. Private Number is no exception. While sites like IMDb have Tom Sizemore and Judd Nelson as the highest-billed actors in the film, the cover of this DVD is very misleading. Perhaps part of the deal for Nelson and Sizemore was to be featured primarily on the cover, but I really doubt that is the case. The relationship of the DVD’s cover to the film itself feels like producers that have little faith in their project. So instead of promoting the interesting concepts of the film on its cover, they plaster the familiar faces of Nelson and Sizemore onto it, in hopes of making a few extra bucks. So if you are going to watch this movie for those actors, save yourself the trouble: they have a total screen time of 8 minutes.

Private Number is a peek into the life of Michael Lane (Hal Ozsan), a writer struggling with sobriety and writer’s block after the success of his first book. Stop me if you’ve heard this before. Soon he and his wife (Nicholle Tom) begin receiving strange phone calls at early hours in the morning from a private number, all with the same message: “Remember me?” When bringing the issue up to Sheriff Stance (Judd Nelson) doesn’t resolve it, Michael takes matters into his own hands. As the phone calls persist, Michael begins to hallucinate, making his investigation spiral out of control.

Notice how I wasn’t able to fit the second-billed Tom Sizemore into my brief description of the plot. He plays the role of a member of the A.A. meetings that Michael attends twice in the film. These scenes are completely unnecessary and do not further the plot in any way. Placing Tom Sizemore in this role results in a major disappointment to anyone who actually wants to watch him in a film. Where Judd Nelson as the Sheriff tells part of the story, Sizemore’s role could have been axed and we probably would have had a better movie.

With that said, the movie does have many strengths. However, I would say that it has too many strengths. The film barrages you with very interesting concepts, but all of them are rather unoriginal as a whole. How many thriller/horror films have you seen about a struggling, hallucinating, violent writer? A serial killer? Ghosts or hauntings? A police coverup? Do you see where I’m going with this? Put all that (and more) into a single film, and don’t forget about the obligatory M. Night Shyamalan twist ending. I guess what I’m saying is that this film is an amalgamation of multiple attractive concepts that I did want to see, but before the film delivered on making the concept more original, it jumped right on to the next one. In a sense, the film did not know what it wanted to be.

I think what saved this movie was the great performance by lead actor Hal Ozsan and his version of spiraling into paranoia and madness. I found myself recognizing each of the tropes, but wanting to see how Ozsan reacted to them as a character. Despite having to transition from sober, to alcoholic, to writer, to detective, Ozsan did a fantastic job of keeping the character consistent and interesting. Nicholle Tom also played her role very well, as a dutiful wife who suffers from seizures. In addition to the acting, the special effects are noteworthy. All of the ghastly makeup was well done, and anywhere CGI was used, it was used minimally and tastefully. Overall, I wanted to enjoy this film more than I did, but it suffers from a lack of direction that it never quite recovers from.

See You in Valhalla Ships (Ferahfeza)