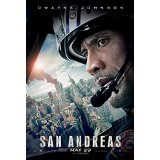 “We’ll get hit again…and it’s going to be a bigger monster.”

The character who utters these words in San Andreas is referring to an impending earthquake that could literally rip California apart. But he could just as easily be talking about the summer movie season, when audiences who have just been rocked by a catastrophic quake have to deal with something called “Indominus Rex” a mere two weeks later. San Andreas almost certainly won’t end up as the biggest bully on the Hollywood block, but it’s a big, dumb, fun disaster flick the whole family can enjoy.

Chief Ray Gaines (Dwayne Johnson) is an L.A. Fire Department helicopter pilot with a sterling professional reputation for saving people’s lives. Of course, the one person he couldn’t rescue was his daughter Mallory, who died during a rafting trip years earlier. Ray never emotionally recovered from the accident, which left him disconnected from soon-to-be-ex-wife Emma (Carla Gugino) and surviving daughter Blake (Alexandra Daddario). As Blake prepares to head off to college — and Emma prepares to co-habitate with her posh new architect boyfriend Daniel (Ioan Gruffudd) — the state of California is rocked by a massive earthquake.

Earlier on, I referred to San Andreas as something the whole family can enjoy. Sure, there’s plenty of death and disaster-related mayhem, but director Brad Peyton and writer Carlton Cuse have structured their film in a way that unintentionally(?) makes the case that this apocalyptic earthquake might be the best thing that could’ve happened for Ray’s family life. After the quake hits, Ray races to save Emma in Los Angeles and Blake in San Francisco. Blake had been accompanied to San Francisco by Daniel, but ends up surviving the disaster with the help of jittery, charming Brit Ben (Hugo Johnstone-Burt) and his younger brother Ollie (Art Parkinson, who basically steals the movie).

San Andreas is something of an anomaly in that it’s a summer blockbuster with a budget north of $100 million that isn’t a sequel or a reboot. (There are people in real-life who believe a devastating earthquake along the San Andreas Fault is imminent, and those concerns are colorfully expressed here by the CalTech seismologist Paul Giamatti plays.) Of course, San Andreas‘ “originality” is a matter of semantics. The movie may not be based on a specific preexisting property, but it owes a lot to some of the disaster movies that came before it.

The obvious doppelganger is 1974’s Earthquake, which is mostly remembered for spawning the creation of seat-rattling Sensurround and inspiring a theme park ride at Universal Studios. (The movie itself — which featured a star-studded cast led by Charlton Heston — is less fondly remembered than both those things.) But the CGI-heavy San Andreas actually made me feel like I was watching a Roland Emmerich film festival. A father heroically racing to save his stranded, blue-eyed progeny in the face of a natural disaster? Check! A world-changing catastrophe potentially rekindling a romance between estranged spouses? Double check!! Destruction of iconic landmarks? But, of course!!! The special effects in San Andreas are frequently spectacular — in case you’re curious, the Hoover Dam, Golden Gate Bridge, and Hollywood Sign all get what’s coming to them — but it’s disappointing that all this technical wizardry filmmakers have at their disposal often leads to such uninspired storytelling. (You’re not gonna believe this, but the first significant death is a minority character.)

At least Peyton — who has effects-heavy/kid-friendly adventures like Journey 2: The Mysterious Island and Cats & Dogs: The Revenge of Kitty Galore on his resume — finds ways to sneak in light, nimble touches. I’m thinking about the opening sequence, which features a couple of clever fakeouts before it imperils a distracted driver. That first car crash is presented as a giddy amusement park death trap, and many of the collisions that come afterward follow suit. Overall, Peyton and Cuse seem to be aware of how dumb their movie is. That being said, the film would’ve benefited from nixing a few of its groan-worthy one-liners; the one that Johnson delivers after parachuting into AT&T Park in San Francisco is a doozy.

Then again, The Artist Formerly Known as “The Rock” is one of the few people starring in action movies these days who can really sell a cheesy catchphrase. Up to this point, Johnson has been “franchise viagra” for The Mummy, Fast and Furious, and G.I. Joe movie series. (Not to mention teaming up with Peyton for Journey 2…I’m good skipping over Be Cool if you are) In San Andreas, he’s entrusted with the responsibility of launching his own franchise. It didn’t go super well with last year’s Hercules, and San Andreas doesn’t quite tap into what I believe to be a deep well of charisma and star power. Not to belabor the Roland Emmerich comparisons, but San Andreas had the potential to turn Johnson into a big-time leading man the same way Independence Day did for Will Smith. Johnson — who is surprisingly at ease when he goes into doting dad mode — is good here, but doesn’t get to that level.

The rest of the cast is solid. This is the third movie Johnson and Gugino have appeared in together — following Race to Witch Mountain and Faster — and the pair have a pleasing ease with each other on-screen. I also liked that Daddario’s Blake is much more resourceful than your average damsel in distress. Meanwhile, Giamatti is exactly the type of zippy, overqualified performer you want delivering scientific exposition and livening up scenes that don’t have Johnson swooping in to rescue someone.

Despite its premise, San Andreas doesn’t come close to breaking any new ground. But at 107 minutes, it’s refreshingly breezy compared to many of the bloated blockbusters that lumber well past the two-hour mark. More importantly, the movie is an unabashed crowd pleaser — the resident coward gets a predictable but satisfying comeuppance — that offers thrills by land, by air, and by sea.

The Poltergeist of Borley Forest Asylum