Posted in: No Huddle by Archive Authors on June 1st, 2015 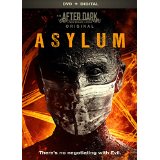 I have never been more confused as to what constitutes a spoiler in a movie. I am going to attempt to give the best synopsis I can here, but just know, I was extremely confused throughout this entire movie. We follow two movie studio workers as they watch one of the movies their studio is set to release. The two add dialog (a la Mystery Science Theater 3000) to the film, and we follow their story as well. I was supremely disappointed when I started watching this movie. There was nothing that led me to believe that this movie was going to be a comedy; I would assume that this “surprise” was the intention of the makers, but it ultimately left me confused throughout the entire movie. I had to keep going back and forth, from the menu screen of the DVD to the movie itself to make sure I was watching the correct movie, and not an extra. After I triple-checked that I was watching the right movie, I started to try to pay attention to what was going on in it. What I figured out is that this movie failed on almost every conceivable level. Some actual funny lines of dialog save it from being the worst movie I have ever seen, but it really tried to get to that top spot in my mind. For starters, the characters are written in like they were thought of last-minute. You can’t follow any sense of storyline, in either the “horror movie” or the comedy part. Everything seems like it was rushed to production, or that they were trying to save an already sinking ship.

It feels as though they were trying to make a real horror movie, found out it was bad, then added in the comedy bits as a last-ditch effort. It feels that way because the edits between the horror movie and the duo watching the movie are bad; not just regular bad, like first-day-of-film-school bad. We are either fading to black, or being treated to some other unfortunate transition tactic that makes this movie feel as though it was edited in Windows Movie Maker. Not only are the transitions bad, but when we are watching the horror movie we are being treated to the unedited version of the horror movie. So we are seeing wires, fake blood, editor notes about each missing piece, etc. I can’t forgive that just because it was the “unedited version of the horror movie” for the sake of the comedy portion, it just comes off as lazy and unnecessary.

Whether the movie is pulling you through the horror portion of the movie or the comedy portion of the movie, we are treated to the most subpar acting in any movie I have seen to date. It’s hard to pinpoint where the worst acting in this movie lies, since there are two parts to this movie. I can’t necessarily poke at the horror movie actors since the two people giving dialog point out most of the misfortunes of the acting within the horror movie. I also can’t say anything about the comedy portion, since it seems that the actors were uncredited (or they are credited and I just couldn’t find their names). Let’s just say that every actor in this was guilty of overacting at one time or another, and that no one convincingly delivered dialog.

“This movie is unwatchable” is a piece of dialog from one of the characters, and I couldn’t agree more. There was no part of this movie that made me feel like I was justified in watching this, save for some funny one-liners. Do yourself a favor and never watch this movie.