Posted in: No Huddle by Archive Authors on June 2nd, 2015 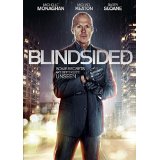 Our story follows Sara, a woman who was blinded due to an encounter with a suicide bomber during a tour with the army as a photo journalist. We meet her after she has been blind for three years, and she has met a rich man who has seemingly gained his wealth through investments. After going out for champagne, she comes home to find her boyfriend killed and a man waiting for her with a knife. When the man’s partner comes, it is revealed that her boyfriend made his wealth as a thief and has stolen something precious from the two men who are holding Sara hostage: diamonds. The men must try to get the information they need from Sara, and she must do what she can to stay alive during their encounter.

The story here was surprisingly well rounded. It gave me a fresh perspective on the home-invasion hostage angle. It shows how helpless a blind person is in this situation at first, then leads into how survival instincts make Sara a force to be reckoned with. It wasn’t a perfect storyline. There were some flashback sequences that felt out of place, like they were hinting at Sara having PTSD without actually having it serve any purpose. I can understand how Sara is not helpless due to her background, but I don’t need to be reminded of it constantly.  The mystery angle did keep me guessing, but the ending left me asking more questions then I should have had to ask. So as not to give away any spoilers, I will just say that ambiguity is a powerful ally in these types of movies, but not at the cost of complete uncertainty. Even with these troubles against it, the way this movie was shot ultimately won me over.

The director knew how to drive home the fact that the protagonist in this film was blind. The work he did with the camera kept me on the edge of my seat and provided the perfect ambiance for the film. A shot of the intruders in a mirror, or a shot of Sara passing by the dead body of her boyfriend where she narrowly misses stepping on the pooling blood, are great moments of anticipation for me. I can see many viewers yelling at their screen for Sara to just step two more inches to the right, and those are the best moments in a thriller for me. The only thing I would have added would be a couple of black screen shots with sound effects thrown in to help us empathize with her character more.

The acting in this ranged from decent to amazing across the board. Michelle Monaghan did OK as a blind woman, but there are moments where I can notice her focusing in on something that she shouldn’t be focused in on due to her character’s condition. The real heavyweight in this film is Michael Keaton. He sold his character better than I ever thought possible. He played crazy so well you think he might have gotten a little too lost in his character, and when I can’t tell if an actor is necessarily acting anymore, that means they have done their job perfectly.

This movie may have had a few missteps in the writing department, but an amazing performance by the director and Keaton more than make up for the few things holding this movie back. This is definitely something you should check out, especially if you are a Keaton fan.