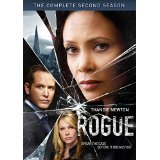 Until recently DirecTV’s Audience Network was a home for critically-acclaimed shows that somehow lost their feet on another network. It started with Friday Night Lights and more recently Damages. So DirecTV was no stranger to original series production. Now for the very first time the satellite carrier and network have developed their own television series. Rogue would be the first show on the network not to have played somewhere else first. The effort is a collaboration with eOne and Greenhouse Entertainment. From the first ten episodes of the first season, you can bet it’s a pretty wild ride and a relatively strong start.

Grace Travis (Newton) is taking a break from undercover work. If you saw season one, you can understand why. If you haven’t, you can certainly watch this season. It’s stand-alone enough to have everything you need. You will get a lot more out of the story by starting with the first season. Now Grace is part of an FBI task force. The head of the task force is Elliott (Evans). Of course, he’s not revealing the true nature of the operation. It appears to be a prostitution sting, but there’s a lot more going on with the powers that be. His second in command is Marlene (Roth). She has had a shaky past and is on her last strike with the FBI. The two have also had a romantic past that could get in the way. Grace is the handler for an undercover agent, Sarah (Palladino). In the season’s first episode she is sent into a dangerous situation and ends up missing after a frantic cell message for help and a bloody crime scene left behind with the investigation subject dead.

On the home front, Grace is dealing with her ex-hubby’s approaching new baby. Of course, it is an emotional issue after the loss of their child together in the first season. She’s also dealing with the arrival of her estranged mother who interferes with her relationship with her own daughter. All of this is about to get worse when the missing agent means someone else has to go undercover. Grace is doing it again and has to leave her daughter in Mom’s care. If that’s not bad enough, she is putting herself in the middle of a case that is bigger and more violent than she suspected.

The target is a team of ex-military guys with a pretty big secret of their own. The dead suspect was one of their own and a bit of a loose cannon. They are attempting to start a security company while on the run from a nasty deed they pulled off when they were in-country during the war. The leader of the group is Ethan (Hauser). He’s the calm and collected member who is not quick to panic and the one Grace is tasked with getting close to. Spud (Fletcher) is the weak link. He’s the tech-savvy guy, but he is also prone to panic. It’s his deeds that will cause the group the worst headache. Ray is the tactical expert of the group and finds himself at odds with Spud. Both are also family men.

The season sets itself immediately as different from the first. The targets are bad guys, but not for the reason the team believes. They are also trying to find out who killed their friend and if it ties into their other troubles. You almost feel sorry for these guys until you start to piece together what they did. They are also more of the focus of the season. There is actually less Grace here, and while I love the character, I found less to be more. Having the screen time spread out like this added a dynamic that was missing in the show’s first season. You get the idea that a show could have been created around these guys, and I think I might have really liked that idea. They have terrific chemistry and a complicated relationship. When it begins to unravel, you get the show’s best tension in both seasons. Obviously these are the show’s bad guys, and I’m going to miss them next season. It’s going to be a tough act to follow.

For those looking for connections to the show’s first season the family dynamic fulfills most of that. There is a return by Alec Lazlo (Sasse), who is the son of Jimmy from the first season. Unfortunately, his inclusion is a bit forced. He has a few good moments, but that tie-in never really worked for me. He doesn’t have any real chemistry with Grace, and it ends up more of a stunt than any concrete part of the story.

The cast continues to be an international mix. While it might be set in the United States, it’s filmed in Canada and sports a cast made up of Americans, Canadians and Brits. You get all 10 episodes on four discs with about 40 minutes of bonus footage/features. It all ends in a cliffhanger this season, so you’ll need to catch up on this if you’re planning to watch the third season airing soon. The show has a way of changing quite nicely from season to season without the complete clean slate that has become trendy with shows like True Detective and American Horror Story. It’s a nice balance of the two approaches, and it works. “I think we’re close to something.”

Gino Sassani is a member of the Southeastern Film Critic's Association (SEFCA). He is a film and television critic based in Tampa, Florida. He's also the Senior Editor here at Upcomingdiscs. Gino started reviewing films in the early 1990's as a segment of his local television show Focus. He's an award-winning recording artist for Omega Records. Gino is currently working on his 8th album Merchants & Mercenaries. Gino took over Upcomingdiscs Dec 1, 2008. He works out of a home theater he calls The Reel World. Favorite films: The Godfather, The Godfather Part II, The Body Snatcher (Val Lewton film with Karloff and Lugosi, not the pod people film), Unforgiven, Gladiator, The Lion King, Jaws, Son Of Frankenstein, The Good, The Bad And The Ugly, and Monsters, Inc.
Blindsided Bonanza: Season 8