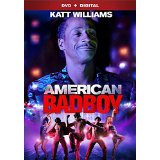 I’m going to go on record and say that it is highly likely that I do not fit into the target audience for this film. OK, now that we got that out of the way, I feel perfectly comfortable stating that I don’t believe that even the target audience will really enjoy American Bad Boy. I just knew that when Magic Mike was released that we broke the dam; now everywhere I turn there is a movie about male strippers. Now, I’m not a prude, but when it comes to this movie, it is nothing more than a shiny penny; the target audience is expected to be dazzled by the muscular bodies rather than the story itself or lack thereof.

OK, we start with a decent guy, down on this luck. He aspires to earn a record deal with his music and share his voice with the world. Problem is he is indebted to a shady club owner (Katt Williams) who makes him dance at his club to pay off his obscene debt.OK, let’s take a moment right here. A guy working at strip club dreaming of something better, does that sound vaguely familiar to anyone? Oh, come on, I haven’t even seen the movie and it sounds familiar. Pressing on, not only is this guy leading a double life, in his everyday life he is the son of a pastor who, if he discovered what his son did with his nights, would likely bring down a bit of fire and brimstone himself.

Eventually the stress of leading both lives begins to weigh on our protagonist; however, I would have expected a lot more angst from a guy in his position. Here we have a guy who is basically lying to everyone he knows including his very devoted girlfriend who loves and trusts him. Not to mention the fact that he is up to his eyeballs in debt to a guy who based off what I saw was not known for his compassion (and not exactly intimidating for that matter), and the most we ever really see him do is complain about it occasionally. First order of business in improving the film would be beefing up the male lead’s performance. Actually all the actors’ performances need improving, but specifically the lead’s as he is the primary focus of the film. It is evident that the actor is green, as there is no real range of emotion throughout the film; no matter the situation his reaction tends to be the same; he responds in the same soft-spoken voice. The role requires someone able to reach the highs and lows, and that was not the case for this individual.

Here is why I referred to the film as a shiny penny; it is painstakingly clear that the audience (which I assume is expected to be predominately female) is supposed ignore the obvious holes in the story in exchange for being able to view bare bodies. It is an all-too-obvious gambit on the part of the filmmakers. Being that this was not my kind of scene, it was far too easy for me to look past this; however, I don’t think the filmmakers gave their audience enough credit. It is true that some people can be distracted by sex appeal; however, I am comfortable stating that the ruse is not going to work in this case. In all likelihood the audience will walk away from this film saying, “That was probably the sexiest bad movie I’ve ever seen in my life.”

In the future, the makers of this movie need to spend more time on character development and casting selection, as these were the sections that set off the most red flags with me. Emotion is what drives a film, and the monotone unfolding of this story made the entire experience something to endure rather than something to enjoy. In conclusion, it takes more than sex appeal to create a worthwhile movie experience.

Jeremy Butler is a film school graduate of the International Academy of Design and Technology. He is been writing for Upcomingdiscs since 2012; however, movies have played a big part of his life for much longer. Favorite genres include horror, science fiction/fantasy, and comedy. Favorite movies are V for Vendetta, Boondocks Saints, Kiss Kiss Bang Bang, and The Godfather.
The Squeeze The Swirl