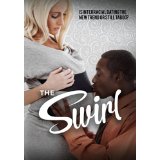 I honestly didn’t know what to expect when I sat down to watch The Swirl. I didn’t need urban dictionary or the comically on-the-nose tagline on the DVD cover to tell me the film would be exploring the world of interracial dating, with a strong emphasis on the relationships between African Americans and Caucasians. But I assumed I’d be watching some no-budget melodrama that would (at best) be good for some unintentional laughs. Instead, The Swirl set out to be funny on purpose.

Turns out The Swirl is a “documentary” that curiously blends man-on-the-street interviews, movie clips, polling data, and wisecracks from a handful of comedians. It’s a lot to pack into the movie’s slim 45-minute running time, which is why there’s a fairly extensive amount of bonus material included on this DVD. (In fact, some of the absolute funniest riffs from comics like Rodney Perry and Reggie Jackson are relegated to the special features because there’s no time for them in the feature presentation.)

The entire thing plays out like one of those I Love the… BBC/VH-1 documentaries that examined a different decade from a pop culture standpoint. Speaking of pop culture, The Swirl shouts out to significant moments in fictional interracial relationships, whether it was Kirk kissing Uhura on Star Trek, or Tom and Helen Willis’ marriage being a vital, refreshingly unremarkable part of The Jeffersons. Not surprisingly, Spike Lee’s Jungle Fever also receives a good amount of attention. These clips are a good reminder of the power media like TV and movies can have; seeing these sorts of relationships — or any trend that might only seem to be occurring in your personal orbit — depicted on a grand, mainstream level can serve to confirm or legitimize them.

The Swirl also examines interracial relationships among celebrities (Kim Kardashian and Kanye West) and normal folks. There’s an amusing, *completely* unscientific exploration of the idea that Halle Berry’s relationships with white men tend to fare better than those with black men. This kind of silliness is sprinkled throughout The Swirl, and it makes for an odd mix. I don’t mind the idea of bringing levity to the sensitive subject of race. But this documentary also seems interested in having a (semi)serious discussion about some of the side effects of “swirling.” That includes the marginalization (and demonization) of the “angry black woman”, who is painted as being perpetually bitter due to being spurned by black men who favor white women.

Unfortunately, The Swirl refuses to fully commit to the joke. (Although it does include a few instances of faux-serious black and white b-roll that nicely spoofs “serious” documentaries.) More importantly, it also doesn’t offer any new information, nor does it approach the topic in a particularly innovative way. The kitchen sink approach here only works about half the time, but there are genuinely witty observations that struck a chord with me. This includes the obsession and fetishization of biracial children; a few interracial couples here talk about rolling their eyes whenever somebody tells them “your children are going to be beautiful” solely based on the fact that they’ll be biracial.

Despite producing semi-consistent laughs, this documentary isn’t quite funny enough to recommend as a comedic lampooning of a sensitive subject. It’s also not brave enough to be truly provocative or controversial, even though it does touch on some of the conversations real people have about this topic. But for me, the biggest shortcoming in The Swirl is also the most ironic: for a documentary about interracial dating and open-mindedness, there’s a strange lack of inclusiveness of couples who aren’t black/white.