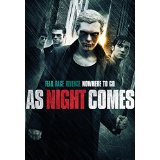 Now this was an interesting one for me. Usually when I watch a movie I like to look for uniqueness, what sets it apart from the thousands of films (I’m pretty sure that’s accurate) I have seen in my lifetime. In the case of As Night Comes, I didn’t particularly find it unique, but there was something that I just liked about it. Given the choice, there are aspects I would change to provide a more engaging experience; however, as is, the story is still worth a watch. Well, to start off, I kind of got the wrong impression of the film; I was expecting a fantasy drama, possibly a film about vampires. Not the film’s fault, so I accept the blame on that score; however, if you watch it, I’m pretty sure you would likely get the same vibe I did. What led me to that impression was the antagonist Ricky; he is not a very big guy, but he is treated in a fashion that displays that he is feared by quite a few. The reason for that is explained a bit later, but let’s not get ahead of ourselves. I was not fond of the way the film opened; we are just dropped right in the middle of a conflict between Ricky and a secondary character (who serves no real purpose; the film would have likely been the same without him). It would have been helpful to start off with a different scenario, somewhere I could identify the characters and their overall roles in the story, because it is difficult to do that from this opening. At this point, it is not even possible to truly determine that Ricky is the antagonist; I mean, yes, it is clear from the secondary character that Ricky and his friends’ presence is not welcome, but the only real conclusion you can draw from that is that this group are outsiders. Possibly a less confrontational opening would have made things slightly easier.

To talk about the acting aspect, the actor chosen wouldn’t have been my first choice. It’s not that he did a bad job; he had a slight presence to him; however, his look just didn’t fit the character he was portraying, especially during the opening. I did warm to the character as the film progressed, and I began to see his talent, especially during the climax of the film between Ricky and Sean. To touch on the character of Sean, the actor does an adequate job of illustrating how misguided his character is and being torn between his affiliation with the group that essentially saved him and his mother (if you want to know how, you’re going to have to watch the movie, I’m afraid) and the call of fitting into the social hierarchy that is high school. When it comes to the acting, these are the only two characters worth mentioning, as everyone else is clearly secondary and truth be told one-dimensional. The dynamic between Sean and Ricky is the best part of the acting aspect; Sean attempts to act as the group’s moral conscience during their escapades of petty crime and vandalism; however, he is very timid and lacks the assertive personality needed to be effective in that position. Later on we learn the reason for his personality, but for now you’ll just have to take my word for it.

As Night Comes has a pretty good story to it, although I did get a slight The Purge vibe while watching it. The main event that the story is built around is Mischief Night. I’m sure everyone is familiar with the event, but if you aren’t, I’ll explain. Generally, Mischief Night is the night before Halloween (however, I am unsure if that is its context in the film), but basically it encompasses a bunch of teenagers going out late at night and committing random or usually targeted acts of vandalism to unsuspecting bystanders such as TP’ing or egging someone’s house, or it can even be more extreme such as causing property damage (breaking car or house windows). The long and short of it is Sean as the newest member of the ensemble has never experienced how far they go on this day. To give a clear picture, this is the type of group that goes to a movie theater and when being thrown out of the theater for their antics, set off an M-80 in the concession stand. Now, on this day, Sean must deal with the group as they are completely unhampered by anything, and he learns that a lot of planned acts involve hurting people. It is at this time where Sean is forced to make a decision either to join in or stand against them. I’m sure you all can guess what he chose to do. Not to give anything away, I will say I did not like how up in the air the ending left things.

So as I said, there wasn’t anything was especially unique about the story, yet it managed to hold my interest, which counts for something. Granted, I’m of the opinion that the story could have been slightly better in the hand of more seasoned actors; the cast, predominately the two leads, were enough to make As Night Comes worth watching.

Jeremy Butler is a film school graduate of the International Academy of Design and Technology. He is been writing for Upcomingdiscs since 2012; however, movies have played a big part of his life for much longer. Favorite genres include horror, science fiction/fantasy, and comedy. Favorite movies are V for Vendetta, Boondocks Saints, Kiss Kiss Bang Bang, and The Godfather.
Christopher Lee Tribute (1922-2015) Survivor’s Remorse: The Complete First Season