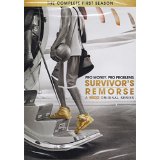 We look at professional athletes who’ve hit the genetic jackpot and make unseemly amounts of money, and we assume that they’ll be financially set for the rest of their lives. Survivor’s Remorse, a Starz sitcom that follows a young basketball star who’s just signed his first big-money deal, gives us a frequently funny, consistently crass glimpse into why that isn’t necessarily the case.

“Cam Calloway grew up in the roughest section of a tough town, heroically raised by a single mother, a loving sister, an uncle, and a cousin who’s still his most trusted ally…”

Cam (Jessie Usher) began his professional career as an undrafted free agent in Memphis, but eventually played his way into a massive contract with Atlanta. We meet Cam as he and his cousin/manager Reggie (RonReaco Lee), Reggie’s business-savvy wife Missy (Teyonah Parris), and the rest of Cam’s family attempt to adjust to their new luxurious lives in the ATL. That includes Cam’s feisty mom Cassie (Tichina Arnold), his voracious lesbian sister Mary Charles, aka M-Chuck (Erica Ash), and his gleeful hustler Uncle Julius (Mike Epps).

A good chunk of the six-episode first season of Survivor’s Remorse is pure fish-out-of-water comedy as the uncouth Calloways set PR fires (a potential child beating scandal; M-Chuck’s aggressive PDA offending a pastor in church) that Reggie and Cam have to put out. It also plays a bit like the early seasons of Entourage, with a newly-rich young man eager to share the wealth with those closest to him.

But as the title of this show suggests, Survivor’s Remorse is interested in being more than an escapist piece of entertainment where members of a superstar’s inner circle (and the TV viewers watching them) get to vicariously ride his coattails. The show counts NBA superstar LeBron James as one of its executive producers; so whereas most people would tell a rich professional athlete to wipe away his tears with $100 bills, it’s not surprising to find the series takes a more sympathetic look at the burden of being rich and famous. (In the pilot, Reggie warns Cam about winding up as a 30 for 30 cautionary tale.)

Cam is also a compassionate (if naïve) mogul who name checks Oskar Schindler as one of the reasons he never feels like he can do enough for the less fortunate people in his old neighborhood who weren’t blessed with a jump shot. The push-pull between the Calloways’ old lives and their new status as members of the social (mostly white) elite serves as the heart of the series. Ep. 3/“How To Build a Brand” has Cam whining about having to do a “Make a Wish”-style hospital visit, and Ep. 4/“The Decisions” has Reggie groaning about being forced to join a country club. Each situation has an unexpected, comedic twist.

That’s another thing about Survivor’s Remorse: it’s fast and funny, and the vulgar familial banter between the Calloways feels genuine. Creator Mike O’Malley and his writing staff deserve credit for bringing that energy to any scene where the family is hanging around busting each other’s chops. To be honest, I was pretty surprised to see O’Malley’s name as the show creator, since his previous TV efforts (The Mike O’Malley Show, Yes, Dear, and a fan-favorite recurring role on Glee) didn’t exactly scream out “urban basketball sitcom.” (Culturally-specific punchlines like “Spend your money, Hammer” and “You ain’t the Fresh Prince, and you ain’t Carlton” got more than a chuckle out of me.)

The cast has good chemistry. Usher is nominally the star of the show, but as with Entourage the central figure of the story is largely a cipher who is propped up by more vivid characters. That being said, Usher has a likability that made me believe Cam really is a chronic people pleaser. If we’re staying with the Entourage comparisons, then Reggie is a combination of gatekeeper E and dealmaker Ari. Lee has more swagger than Kevin Connolly’s E, but isn’t asked to be the force nature that Jeremy Piven brought to Ari. Then again, it’s not exactly necessary because Arnold and Ash bring plenty of forcefulness as the two main women in Cam’s life. Arnold’s over-the-top work feels spot on in a world where LeBron’s real-life mom has generated more than her share of headlines. And Ash totally throws herself into M-Chuck’s skirt-chasing ways, which gets a refreshing twist here. (Why should guys have all the promiscuous fun? Of course, this is still Starz, so the result is still plenty of eye candy for male viewers.) Epps makes the most of his relatively limited screen time as Uncle Julius, who likes his nephew as much as he likes his fancy new life.

Survivor’s Remorse: The Complete First Season features all six episodes on two discs. The lone special feature is a “Meet the Cast” featurette on Disc 2. Season 1 culminated with Cam and Co. trying to decide whether to ink a shoe deal with Nike, Under Armour, or a wild card Chinese company that pursued him the most aggressively. In terms of dramatic stakes, this isn’t exactly life or death stuff. But I’m still interested in seeing what happens next…and if Reggie can stop Cam from spending all his money before the end of the 10-episode second season, which is set to debut this summer.