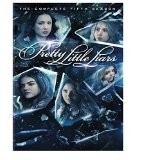 “It means what it always means. Nobody tells you anything when you wanna know it. Only when they feel like telling it. And then only enough to make you crazy to know more.”

When it comes to Pretty Little Liars, it seems making the fans crazy is what they do best. The fifth season of the show is out on DVD, and this is no place for beginners. If you don’t know who Aria, Spencer, Emily, Hannah and Alison are, it’s time for you to head back to the beginning and catch up. You can find our reviews from those seasons here. For the rest of you, let’s talk Pretty Little Liars, shall we?

The fifth season opens up just where we left off the previous year. Ezra (Harding) has been shot and is being rushed to a New York City emergency room. The girls are gathering with Alison, whom everyone had just found out was still alive. In flashbacks we learn about the relationship between Alison (Pieterse) and Ezra. We also discover that he owned an historic theater in the New York theater district. It’s where the Liars attempt to hide out while they await Ezra’s fate. The road trip ends in tragedy, but not for Ezra. It’s Aria (Hale) who ends up having to kill the girl they most recently believe is A. I won’t give that identity away here. Of course, she did it to save her friends from being killed, but it will haunt the character for half of the season. She has nightmares and watches the girl’s funeral online endlessly. It’s a pretty traumatic thing for a teen girl to deal with. Everyone from the writers to the actress do a wonderful job of showing the effect of her actions. But at some point in the season, it’s as if the decision was made that she’s suffered enough, and the effects completely disappear from the performance. The show drops the ball here, made painfully obvious after doing such a great job to begin with.

When Alison does finally get back to the hometown police, she suddenly changes her story to one of being kidnapped and held hostage the last two years. The Liars are as surprised as anyone, but must now back up the crazy story. And believe me, this is where the ramifications of the fifth season begin to take hold in many directions.

The first consequence is the dynamic between the Liars and Alison. It’s like they’ve fallen into the old pattern of following Alison blindly while she manipulates everyone around her. Those manipulations are going to come back to haunt her hard. It will drive a wedge between her and the Liars just when she needs them most. The second consequence is that it wasn’t a very good story. Before long others are dead, including Alison’s mother, and the cops are looking to put the group behind bars for it all.

Mona continues to be a driving character. It’s no secret or spoiler that she turns up missing amid a bloody crime scene where she is believed dead. Alison is the prime suspect. It’s not a stretch. Mona has formed a little army of all of the kids Alison used to torment, and they are out for revenge. It’s natural Alison would be arrested for her death. It’s also going to drag the other Liars into the legal drama, particularly Hannah (Benson). It’s all going to cumulate in a trial of the century for the small town of Rosewood.

The series reaches the 100-episode milestone this season. In an episode called Miss Me X 100, the cops finally reveal who the girl is who was buried in Alison’s grave. You knew this was coming. If Alison is alive, someone else is dead. Now we know who. But it won’t be good news for the Liars, because they’re going to be the prime suspects. The episode ends with one of the most explosive moments as A brings down the house…literally. You may have thought A was gone, and for a while she appeared to be. But this is Pretty Little Liars, and what would the show be without an A? It’s one of the biggest effects for the series and a nice way to end the 100th episode. You also get a short behind-the-scenes feature on the landmark episode.

As special episodes go, there is the traditional Halloween special. The cast gather to answer questions from the fans. The special episode also offers behind-the-scenes looks and video the fans make of themselves watching the show. Talk about a selfie. It’s one thing this series does excel at. They have a pretty close relationship with the fans. They interact with them online and treat them like royalty. I haven’t seen a rabid fan base like this since Star Trek. They truly love this show, and the kind of passion and mania you find in these reaction videos is a cultural phenomenon. I’d say that the cast and crew here have been the first to really maximize the online ability to create a solid community. If this show is ever cancelled, the network is going to hear about it. With this fan base, I expect to be writing someday about Aria spoon-feeding an old and fragile Ezra at the retirement community. A will be sending her threats telepathically, and the fans will be wired directly into the shoot.

There’s a Christmas episode that has Alison visited by some ghosts in a very Dickens-styled story. It’s kind of fun, but the snow looks really bad. It often does on television, but this stuff is particularly bad. Usually the show has great production values, and there are some awesome elements in this show…the snow just isn’t one of them. This episode also has a short behind-the-scenes feature.

One of the biggest elements of Pretty Little Liars for the fans is what they call the “ships”. Of course, we’re talking about the relationships. I’m sure many fans were going crazy this season which finds Aria apart from Ezra twice. She’s got a tutor who wants to teach her more than math and American history. Emily falls for a girl she works with at the coffee store, which is now owned by Ezra, by the way. At first she hates the girl, but we knew where this was going. Emily does the most “ship” bouncing this season. There’s a new swimmer at school she coaches, and she even has a fling with Alison. Of course, the fans can’t wait for her and Paige (Shaw) to get back together, and I’m not going to tell you if that’s going to happen. Spencer (Bellisario) still has Toby (Allen) until he decides to go to the PoliceAcademy to be a cop. The plan is he can help them with their legal troubles from the inside. He gets through the Academy in like two days and is suddenly working for the local cops. It doesn’t work out for Spencer when he feels the call of duty and isn’t as much help as she hoped. That’s O;, she has her eyes and lips on the new bad boy who rents out her backyard barn. Hannah is the most stable this season when Caleb (Blackburn) returns, but she starts out with a little Travis (Kleintank) action first. Even Aria’s little brother Mike (Christian) gets into the “ships” act with, of all people, Mona. You can imagine how Aria feels about that. It also starts to look like little bro might be helping Mona to set them up. Of course, all is not what it seems, and you’ll have to watch to see where that goes.

There are some special surprises. Sara Shepard makes a cameo as a news analyst talking about Alison on a court TV-like segment. The show also goes a little grizzly as many episodes center around a barrel that could contain Mona’s remains. And for you fashion fans in the audience, how about those orange jumpsuits? Yes, all of the Liars get some time locked up, and it leads to a pretty clever season finale where the group is trapped by A in a dollhouse scenario. Spider-Man fans will see a little Arcade action to the finale. It ends with us thinking we know who A is. You know better than that, don’t you?

The guys get to do more this season, and for me that was a plus. They are fully invested in the A thing now. That means they’re in the same danger. They also have some of the tech to try and track A down. Caleb is actually pretty good with the hacking stuff, and they get to be more proactive. It takes some of the pressure from the girls to be dramatic all of the time. It’s nice to see the guys run to the rescue from time to time. They’ve also gotten a chance to form more chemistry between themselves and make a pretty good team.

The production values continue to be high. Say what you might about the content, everyone works hard here, and they do a good job with the little details. The acting is pretty solid, and the Liars have a pretty good chemistry going on between them by now. The addition of Alison mixes up the dynamic a little, but that was a good thing. It’s easy for this show to get stale. I’m not sure how long they can continue to run out this A thing. I suspect we’re going to find out. You’ll get an impressive 25 episodes on six discs with a few extras to round it all out.

The show continues to deliver the type of thing its audience loves. I’m not an adolescent girl, so a lot of this is wasted on me. Why do I review it? No one on our staff fits that description, and sometimes you gotta take one for the team. I will admit the show has its moments even for me. Just don’t tell anyone else on the staff that. I get a lot of mileage out of the whole taking one for the team bit. Still, the show gets quite silly when you think about it. The Rosewood cops have to be just about the dumbest cops since that crew worked out of Keystone a hundred years ago. In the end you might find a few secrets answered, but I wouldn’t count on the answers. “The truth doesn’t mean much when it comes from a bunch of liars.”

Gino Sassani is a member of the Southeastern Film Critic's Association (SEFCA). He is a film and television critic based in Tampa, Florida. He's also the Senior Editor here at Upcomingdiscs. Gino started reviewing films in the early 1990's as a segment of his local television show Focus. He's an award-winning recording artist for Omega Records. Gino is currently working on his 8th album Merchants & Mercenaries. Gino took over Upcomingdiscs Dec 1, 2008. He works out of a home theater he calls The Reel World. Favorite films: The Godfather, The Godfather Part II, The Body Snatcher (Val Lewton film with Karloff and Lugosi, not the pod people film), Unforgiven, Gladiator, The Lion King, Jaws, Son Of Frankenstein, The Good, The Bad And The Ugly, and Monsters, Inc.
Survivor’s Remorse: The Complete First Season Contest: Win The Wonder Years Season 3 On DVD From Time-Life and Star Vista