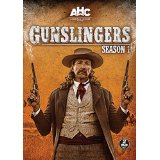 “My name is – . This is my true story like it’s never been told before.”

You can fill in that blank with any one of six names or groups for the first season of Gunslingers. Each episode picks up the story of a legendary icon of the West. We’re not talking about the fictionalized characters from the long run of television westerns. These are the real infamous gunfighters whose history has become the stuff of mythology over the years. The episodes are told from the point of view of that week’s subject, as played by an actor, of course. Other parts are also played out, but the focus is the point of view of that gunslinger. That means the story is going to be slanted somewhat. To balance that perspective we have input from western historians and even actors who might have portrayed the story in Hollywood. Together with dramatization of the pivotal moments, we get a somewhat unique look at an otherwise widely known story.

There are six episodes in this first season. The first is the only one to really feature a group. It’s called The Tombstone Vendetta and tells the story of the famous shootout at the OK Corral. That story’s one of the West’s most famous. There have been movies and even a favorite Star Trek episode dealing with the events. The story is mostly told from the perspective of Wyatt Earp. We’re told the events leading up to the confrontation, and we get an idea where the survivors’ stories went afterward. The episode also includes Kurt Russell, who played Earp in the 1993 film Tombstone.

The next two episodes that finish out the first disc feature two of the West’s biggest legends. We have Billy The Kid – The Phantom Of Lincoln County and Jesse James – The South’s Last Rebel. Both episodes take us deep into the psychology of these outlaws. There’s plenty of the romanticizing of the characters, because it’s told mostly from their own point of view.

Disc 2 touches upon a couple of lesser known western figures: John Wesley Hardin – The Dark Heart Of Texas and Tom Horn – The Grim Reaper Of The Rockies. Hardin has already left us his “version” of events in an autobiography he wrote in prison. He saw himself has a good guy who only killed people who needed killing. It’s a phrase you’ll hear more than once on the series. Tom Horn absolutely believed he was on the right side of the law. His kills were mostly rustlers and troublemakers he was hired to kill, mostly by the various cattlemen’s associations. It was the day of the range wars between cattle ranchers and homesteaders who took advantage of federal laws that allowed folks to grab unclaimed land and build a home upon it and claim it. The ranchers considered that open unclaimed land was necessary to graze their herds. Tom Horn was the kind of guy ready to settle the argument with a gun.

The first episode on that last disc is another well-known gunslinger. Anyone who plays poker knows exactly what a dead man’s hand is. It’s two pair, aces and eights. It gets that name because it’s the hand Wild Bill Hickok was holding when he was gunned down in the back while playing cards. History doesn’t record if it would have been the winning hand. Wild Bill had been many things in the old West. He’d been a lawman, a gambler, and an outlaw. He worked in Deadwood, the location of the popular HBO series.

The series uses dramatizations and real historians along with the actor’s narration. You get to see the gunfights in the bullet time slow motion developed for The Matrix. Because of locations inserted for commercial breaks there’s a lot of repetition of material, and you’ll see the bigger fights a few times throughout the episode. There are no bonus features available on this bare-bones release. There’s certainly quite a bit of information for those who only know the myths and legends. The show is unique enough to hold your interest, but I fear they will soon run out of known gunslingers. That might account for such a short season. It’s from the American Heroes channel, which invites you to the wild west and to “suppose it all happened differently“.

Gino Sassani is a member of the Southeastern Film Critic's Association (SEFCA). He is a film and television critic based in Tampa, Florida. He's also the Senior Editor here at Upcomingdiscs. Gino started reviewing films in the early 1990's as a segment of his local television show Focus. He's an award-winning recording artist for Omega Records. Gino is currently working on his 8th album Merchants & Mercenaries. Gino took over Upcomingdiscs Dec 1, 2008. He works out of a home theater he calls The Reel World. Favorite films: The Godfather, The Godfather Part II, The Body Snatcher (Val Lewton film with Karloff and Lugosi, not the pod people film), Unforgiven, Gladiator, The Lion King, Jaws, Son Of Frankenstein, The Good, The Bad And The Ugly, and Monsters, Inc.
7 Cases If You Build It