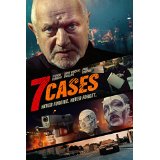 Floyd is a down-on-his-luck ex-bank robber who has had enough of his current life and wishes to pull one last heist with his old partner Mitch. The two plan the robbery, quit their meaningless jobs, and complete the job, getting five hundred thousand dollars in cash split between seven cases. After their success, they go to a remote hideout to wait out the authorities and celebrate. The next day, they discover their money is gone and has been replaced with a cassette tape. A voice on the cassette tape tells them that there are torture devices attached to seven people the duo knows, and their cases of money are with them. The two must choose between money and the people that they may care about; if they try to dismantle the devices a bomb will go off that will kill everyone. Can the two put aside their greed in order to save the people they care about?

This movie had so much potential, but the way this story plays out leaves me with more questions than I am comfortable with. Not good questions like: What happened to the main character at the end? Weird questions like: When did the movie take place? How did the villain get the money to set up this elaborate plan? Who is the villain talking to aside from the main character and the driver? What is the driver’s motivation? There are more questions, of course, but I believe you get my point. One of the things that really bugged me was that they always refer to the money as five hundred thousand, but at whatever exchange rate you are using, five hundred thousand isn’t exactly a lot of money in today’s market. So am I supposed to believe that the main character has no concept of how much money is really worth today, or am I supposed to assume this is just money for the two to move out of the country? Whenever the two come up to a person that they care about they give this speech about not having any other choice but to take the money, instead of rescuing the person. Are they lying to the victim, or did they truly forget that they may actually have a choice? It was just so confusing, and the ending didn’t help clear up anything, it just posed more pointless questions.

The way this movie was shot didn’t help matters either. It isn’t a matter of cheap effects or budgetary constraints; I am simply judging this on the director’s style. There are scenes where the two thieves are emotionally worn out from the deaths of the people they care about, so we see how they feel by the director adding in shots of black and white where one of the characters are screaming or crying. Normally, I would say that this was an interesting tactic, but the timing was weird, and this tactic was overused. Almost all of the death scenes have a weird camera angle that almost completely takes me out of the movie. If it is a woman, we are trying to keep an eye on her chest instead of where she is injured, like when we see Mitch’s ex. If it is a man, they are shot in the most unflattering angle imaginable, like when we see Floyd’s buddy.

The acting in this saved the movie in some areas. Dave Vincent Philips gives us a command performance for his first credited scene in a movie (according to IMDB). He really sells a lot of scenes, even if the scene doesn’t make any sense, or has some dialog issues. Paul Cooper helps in some areas, but he falls a bit short of showing me exactly what his character is going through. If your character sees a family member die, you need to do more than shout and curse; you have to emote that scene to death. The biggest star in this movie, Steven Berkoff, did well enough. He didn’t carry the movie like one would think, but he was decent in his portrayal.

In the end, this movie did very little for me, and the parts that did do something for me were purely thanks to the actors. Even if an actor does well, the movie is nothing without a decent script and a competent director.