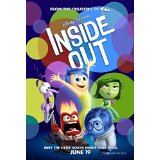 I should say right up front, it seems like everyone loves this film but me. That is pretty much true of all Pixar films. They seem to be above reproach, regret and retribution. I love some Pixar films very much, but many I find to be overpraised. In the case of the new film Inside Out, it is not so much bad as disturbing. It is well made but suffers from two problems. It is not overwhelmingly profound while being somewhat bewildering. Some people might say it is a film for kids, so I should give it a pass, but I disagree. It raises many interesting questions, but it not only doesn’t answer them but gives deliberately wrong answers. I need to take an extreme viewpoint here, because I honestly believe most critics are not doing their jobs. This film tries to tackle a fairly complicated subject for a kid’s film and then blasts us all with a flurry of confusing concepts and an excessively frightening tidal wave of misinformation. Some bloggers are mentioning that the film bears some resemblance to the 90’s sitcom Herman’s Head. One could even say it might have gotten some inspiration from Woody Allen’s Everything You Wanted To Know About Sex, But Were Afraid To Ask.

Inside Out is a look inside the brain of an 11-year-old girl called Reily. Her brain’s central control is run by five animated characters, Joy (Amy Poehler), Sadness (Phyllis Smith), Fear (Bill Hader), Anger (Lewis Black) and Disgust (Mindy Kaling). That is a simplistic view of the brain, but the film gets way more complicated than that. It also gets confusing and mystifying.

The study of the brain is one that most experts will say is in its infancy. It is beyond complicated, but when a science fiction action movie called Lucy came out and asserted that we only use less than 10% of our brain, you could literally hear the screams of the bloggers at every end of the globe. In fact, that assertion may be misleading but is more accurate than not. It is simply a long way off before we know the secrets hidden in the brain. I will say that some of the story elements are so outlandish in Inside Out that they don’t resemble any form of reality. But that isn’t the real problem. The real problem is that the film is relentlessly depressing, even more so because Joy is always going crazy trying to keep everyone in line. Mostly Joy fails miserably. So Inside Out is misleading and depressing. You see where I’m going with this. How can I recommend a film like that? I can’t. But don’t worry. Everyone else is. Go back to the original point. Pixar is above criticism.

My favorite Pixar film is Ratatouille, because it is about two extremely intelligent characters. One is a talented rat with the skills to be a great chef. The other is a sad and disappointed food critic who never finds anything to meet his high standards. The writing bristled with wit, irony, insight, and truth. It also looked fantastic. But not every Pixar rises to that standard in my mind, and since I’m not a Pixar nerd, I don’t hand out free passes.

Inside Out sends us on a journey through a collapsing mind where everything goes wrong. I found it relentlessly grim and harrowing. Does that sound like a kid’s film?

I am trying to be a lonely voice in the wilderness screaming that the emperor has no clothes (a reference to a Hans Christian Anderson story who incidentally wrote a terrific tale that made a wonderful Walt Disney film, Frozen).

All that being said, Inside Out isn’t terrible. It is just something that I would recommend being seen with a parent or maybe a professor of psychology, especially if you’re an 11-year-old girl.