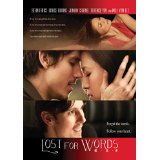 Right off the bat, the first 10-minute flashback in Lost for Words that repeats verbatim at the end could have been left on the cutting room floor. If you’re looking for an in-your-face, action-packed summer blockbuster, this isn’t for you. If you have more sophisticated tastes and are seeking a slow to medium-paced love story that transcends country and race, Lost for Words tells the beautiful bilingual tale of American ex-Marine-now-IT-guru Michael and Chinese modern dance ballerina Anna.

Almost stealing limelight from the story is the incredible backdrop in which the story unfolds. Lost for Words is set against the exotic setting of cosmopolitan and rural Hong Kong. Over 40 days, the cast and crew of Lost for Words travelled across Hong Kong to capture its beauty on film.  Though Jimmy Wong, cinematographer, is a veteran of Asian film, this was his first English-language feature film. The contrasting imagery is stunning and rich, and I expect Mr. Wong will be finding more work in American theater.

Actor Sean Faris, better known for his TV roles in Pretty Little Liars and Vampire Diaries, plays Michael. Young Michael is an IT specialist who wins a place in a prestigious American firm in China, but loses his fiancé back in the States via a CD that says open when you land.  Bounce over to Anna and her BFF Mei-Mei, and the two are setting up their first home and celebrating being the newest members of Star East Dance Company. Mei-Mei is the yang to Anna’s conservative, religious and much more repressed yin.
Flash over to Michael working hard on IT issues, then back to Anna and Mei Mei practicing for a solo role of a lifetime. Do this a couple more times and throw in a coworker confidante for Michael and Anna being chosen for the solo, and at this pace, you wonder if the star-crossed couple are ever going to actually meet.

It’s described as a chance encounter. But Michael and Anna pass one another many times through the progression of the movie – in the airport, in a monorail, in the street. They are even literally on two ships passing in the night – er- day.  Eventually a jog in the park causes the couple-to-be to finally meet. Michael’s Chinese is deplorable, and Anna’s English needs work. The two decide to meet a café to practice each other’s language. Weekly meetings at the café improve both their languages and interest in one another. After several meetings in, Anna asks Michael, as they are both new to Hong Kong, if he wants to explore their new city while practicing their respective languages. He agrees, and they begin a journey across Hong Kong where some of the most incredible cinematography takes place. There is an aerial scene with a clear bottom lift where Anna and Michael are laying head to head on the glass floor, above a canopy of trees, and the view is breathtaking.

With a beautiful scenic backdrop, Michael and Anna’s friendship progresses right on cue to meeting Mei-Mei for a run (who looks at his shoes and remarks he’s poor) to a real date, a photo together, and a first kiss which leads to night of romance and lovemaking…. And Michael not calling for three days. And Anna being offered a lead role in touring company in France. Fast forward to Michael calling Mei Mei as Anna is on the way to airport, Michael finding Anna, and she decides to choose guy over dream job. As their relationship progresses, Anna takes Michael to meet her family for Chinese New Year. Her grandfather questions Michael’s motives and asks about marriage and children. Though Michael is caught off guard, he answers “yes sir, I’d be honored,” beginning to realize he is in love with her. Michael and the family attend mass at her family’s “underground church”, different from what Anna describes as the “patriotic Catholic church.” The service is raided by militia, and one soldier knocks Anna’s grandfather to the ground. Michael fights to protect them, only to be thrown in jail and is rescued by his employer and deported, while Anna is put on house arrest.

At this point, it almost feels like an international Romeo and Juliette-esque theme. Rather than the parents separating the two lovers, it is Chinese military government. But once again, a screenwriter lets me down with the final act. Michael arrives in LA only to schedule a return to see Anna. And???? Fade to Black. Movie title. Credits. Did the writer give up – have a writer’s block and hope no one noticed? Or is he hoping by leaving the ending open, a sequel? Either way, the 107-minute movie was slow, but likeable in any language, but the ending was a tragedy.

Inside Out Country Bucks Season 1