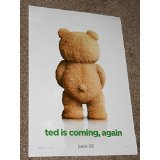 The original Ted movie gave us the answer to what would happen if a beloved toy came to life. I know what you are thinking; Toy Story provided us with the same answer, except Ted went a step further and revealed what happens when the little boy and the beloved toy grow up. Ted was a hard-drinking and drug-taking movie that was beloved by many. When it came to that movie I was thoroughly satisfied, and I did not believe that it could be improved upon, so when I heard the announcement of the sequel, I had reservations. In my opinion, the sequel was clear money grab that was going to ruin all that the original accomplished. I told you that to tell you this: I stand corrected. As it turns out, there was more story to tell, and I am glad that I got to experience it.

The story picks up some years later, Ted is set to marry his girlfriend Tammy-Lynn (yes, it is the original girl from the first one, so it earns points for bringing back most of the original cast) while his best friend John (Mark Wahlberg) is recovering from his recent divorce from Laurie. Fast forward a year later. For Ted and Tammy-Lynn the honeymoon is over, and the day-to-day work of marriage has the two at each other’s throats. Looking for a way to solve their marital problems, Ted decides the two need to have a child (yeah, because that solves everything). After hilarious hijinks involving finding a sperm donor, the two opt for adoption, only to discover that their application was denied because in the eyes of the law Ted is not a real person.

I give the film points for the plot. This is an intriguing and unique plot to explore, because it forces the audience to debate what makes a person human. Granted, yes, we are talking about a stuffed animal; however, it is still an interesting philosophical debate, is it not? What overall determines personhood? To continue with the story, Ted decides to fight for his rights to be considered a person instead of property. He hires Sam Jackson (Amanda Seyfried), a gorgeous yet green attorney to represent his case and possibly get his buddy John out of his funk. Now this part was one of the main reasons I was having reservation about the film. The changing of the love interest is a difficult thing to get over because we have already established a rapport with the original love interest, and no one wants to have to break someone else in. It’s like when your friends meet your girlfriend and they start to like her and then you two break up and you meet someone else; now they have to go through the process of breaking in a new person when they already broke someone else in. However, in this case, I found Seyfried to be a welcome addition to the cast.

There were times while watching the film when she and Wahlberg were standing next to one another I thought that the two just don’t look good visually, but at other times I had to admit there was definite chemistry between the two as well as with McFarlane. She fit in well, able to hold her own, especially during her opening argument in Ted’s court case, her best moment of the film in my opinion (her singing scene is a close second). The addition of Seyfried is great; however, there was one character I was extremely happy to see come back: Giovanni Ribisi. That’s right, Ribisi returns as creepy Donny, and he is hilarious.

I can’t say that Ted 2 is better than the original; however, I will say that I believe it to be on par with the original. Both films include a slew of pop culture references in a way that only Seth McFarlane a can do; however, I will say that there is one pop culture reference featuring the theme music of a beloved franchise that could put this film slightly over the other, though that may have more to do with the context in which it is used. There are some areas where that were lacking or the film could have done without, one of which being the opening dance number. I just found it pointless: a clear allusion to McFarlane’s famed animated franchise, but it serves no real purpose. Another flaw was that there isn’t a real struggle in the film’s climax like in the first one. There is a bit of one, but it is over relatively quickly in comparison. I will say that are a few more heartfelt moments in this one.

If you enjoyed the original, it is highly likely that you will enjoy its successor, as it keeps the core values that made the first one great and continues to push the boundaries of socially acceptable jokes. Though it may cross the line in some areas, it is important to remember that it is all in good fun. So just sit back and enjoy the experience.

Jeremy Butler is a film school graduate of the International Academy of Design and Technology. He is been writing for Upcomingdiscs since 2012; however, movies have played a big part of his life for much longer. Favorite genres include horror, science fiction/fantasy, and comedy. Favorite movies are V for Vendetta, Boondocks Saints, Kiss Kiss Bang Bang, and The Godfather.
Pandas: The Journey Home (Blu-ray-3D) A Little Chaos