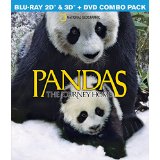 “In these mountains roams one of the rarest species on our planet. A shy, elusive, and gentle creature: the giant panda.”

If you are old enough you will remember President Richard Nixon’s famous trip the China. He was the first President to make the voyage, and it was heralded as a foreign policy breakthrough for the nation. Long after, the hoopla had died down and the only time it seemed Nixon was in the news was for Watergate. But even amid the scandal, one bright legacy of that trip remained for years to come. That was, of course, the Chinese gift to the United States to celebrate the event. We received two pandas named Ling-Ling and Hsing-Hsing that would capture the hearts of a nation even as Nixon was losing them. We all paid close attention as various attempts were made to mate the animals. Unfortunately, there were only five successful matings, and the pups only lived a few days at most. It was a disappointing end to a marvelous story. The pandas did live into the 1990’s, breaking records to panda lifespans outside of China. Today there are new pandas at the National Zoo, and they have given birth to pups that have been returned to China based on the deal we brokered to get them. You can still see those guys today.

What are they? Are they bears? Are they raccoons? The debate, it seems, lives on. But we are still fascinated by one of the rarest animals on the planet. I visited the two at the Washington Zoo as a child, and they continue to draw huge numbers when they appear still today. Between their unique appearance and rare chances of encounter, we all seem to love pandas. Now you’ll have a chance to bring them home in the glory of high-definition 3D.

If you want to see a documentary on almost anything, you can’t do much better than National Geographic. I recall many of their specials of the 70’s with the iconic music. This is a modern version of those days. Instead of fuzzy cameras, we now have the benefit of high-definition video which allows us to get closer to these animals than ever before. The focus is on a rehabilitation center where pandas are being bred and eventually prepared for release in the wild. It’s an attempt to increase the natural population of these animals.

The film takes us to China where there is an ambitious program to increase the population of pandas both in captivity and in the wild. We meet some of the handlers and people who take a long bus ride to work each day to work with the animals. Pretty soon we get to meet some of the pandas in the facility, and that’s where the magic lies.

We start with adults ready for breeding programs. We learn why it’s so hard to get pandas to breed in captivity. Females are only fertile 2-3 days a year. They also appear to be quite particular about their mates. Here we find scientists using a combination of natural and artificial ways to impregnate the females. The pups are cared for and raised to maturity. Here they have plenty of human interaction to make sure they develop strongly.

Once mature, the pandas go to wilderness training where they stop interacting with humans directly. When humans do need to interfere, they do so wearing these silly panda suits that are scented with panda urine and poo. I don’t know what they pay those guys, but it isn’t enough. They teach them to fear predators using stuffed cats and, you guessed it, urine and poo. If successful, the pandas will be returned to the wild.

There are some incredible images here helped by the 3D process. You’ll witness the birth of twins and get up close and personal with the newborn cuties. It turns out that the survival rate of pups went from 33% to 95 % when the caretakers observed the mother licking her young. Turns out it helps them to… yeah, here comes more poo. There’s a wealth of information here, with one glaring inconsistency. We’re told that a female can give birth anywhere from 3-6 months after breeding. Later we’re told it isn’t possible to tell if a mother is even pregnant before 4 months. Maybe something was lost in the translation. Overall there is a lot of cool stuff to learn here and plenty of cute pandas to see in 3D.

Pandas: The Journey Home is presented in an aspect ratio of 1.78:1. The high-definition 3D image is arrived at using the standard duel MVC codec at an average 295/14 mbps. This is a documentary, so most of the images are going to be quite natural in color. The pandas provide for good subjects in a 3D presentation that is more about the natural appearance than any kind of gimmick. The image is sharp and crystal clear. You really appreciate the detail and texture provided when you look at the young pups.

The DTS-HD Master Audio 5.1 is of course minimalistic. The narration provides most of the sound. There are musical interludes and plenty of ambient sounds from the animals themselves. It’s a documentary, and audio just isn’t going to be the focus.

You get both the 3D and 2D versions on one Blu-ray disc.

Save The Pandas: (57:35) This is a vintage National Geographic special about pandas for television. It’s narrated by Voyage To The Bottom Of The Sea’s Richard Basehart. It’s quite interesting to see how both the technology and the knowledge about pandas has changed since the early 80’s.

This is the kind of thing that National Geographic has been doing for decades. The 40-minute film offers plenty of entertainment and information. I credit the film for not taking the time to be preachy. It’s one of those things that works for the whole family. These are truly rare sights of an animal teetering on “the brink of extinction”.

Gino Sassani is a member of the Southeastern Film Critic's Association (SEFCA). He is a film and television critic based in Tampa, Florida. He's also the Senior Editor here at Upcomingdiscs. Gino started reviewing films in the early 1990's as a segment of his local television show Focus. He's an award-winning recording artist for Omega Records. Gino is currently working on his 8th album Merchants & Mercenaries. Gino took over Upcomingdiscs Dec 1, 2008. He works out of a home theater he calls The Reel World. Favorite films: The Godfather, The Godfather Part II, The Body Snatcher (Val Lewton film with Karloff and Lugosi, not the pod people film), Unforgiven, Gladiator, The Lion King, Jaws, Son Of Frankenstein, The Good, The Bad And The Ugly, and Monsters, Inc.
Country Bucks Season 1 Ted 2