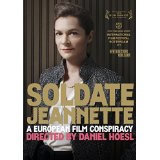 It is always a privilege to watch an Official Selection of the Sundance Film Festival.  I have had the pleasure to screen a few films from Sundance 2013, and I have not been disappointed. Soldate Jeanette (‘Soldier Jane’ translated to English) is not the most captivating I have seen from Sundance, but with its digital camera aesthetics and visually striking images, it definitely carries a certain charm. Director Daniel Hoesl’s first feature-length film focuses on Fanni, an aging woman who is faced with eviction from her apartment. Fanni considers rent an unnecessary expense after twenty long years of living in her home, so she has refused to pay rent for the last three. Instead she spends her money on leisurely activities such as Tae Kwon Do classes or going to the Cineplex to watch silent films. Eventually her ignorance of standard living expenses catches up to her, and she escapes to the country, evading every necessary payment possible, be it a train ticket or a rental car (she takes a dealership car for a “test drive”).  Soon Fanni finds herself at a farm run by a group of men and a woman named Anna, who begins to look at Fanni with jealousy. Eventually, Fanni and Anna develop a meaningful friendship.

This film’s biggest enemy is its pace. While it has very intriguing content, the amount of time it takes to either resolve conflict or introduce new conflict is very difficult to sit through. I am normally a fan of long takes or lingering shots, but in this film they are a dime a dozen. Because they are so frequent, it is hard to find a solid purpose in their existence (if they have any purpose at all). Largely, they are frustrating. If viewer frustration was Mr. Hoesl’s goal in consistent lingering scenes or long takes of minimal activity, he certainly achieved it. This is unfortunate, as the film has such incredible strength behind the snail-like pace.

As you might glean from my synopsis, this film sets out to make money trivial. Fanni believes that spending money on rent is unnecessary, but routinely enjoys her leisure activities, which cost money. However, she even demonstrates how spending money on leisurely activities can be trivial, as she falls asleep at the Cineplex while watching The Passion of Joan of Arc (1928). While Fanni’s screening of Joan of Arc may hold some significance to the director, the idea of wasting money (paying for a ticket, but sleeping through the movie) is what I take to be the most significant critique. Eventually, subtle imagery is thrown by the wayside, as Fanni finally frees herself from her financial troubles by burning the rest of the cash she has in order to keep herself warm for the night, prior to finding the aforementioned farm.

The burning of cash fades to black, and viewers are soon greeted with the slaughtering of a cow (introducing the characters who live on the farm). Be warned, this slaughter is one of the more gruesome slaughterhouse scenes I have seen in my lifetime. Filmmakers have long captured the slaughtering of animals with their cameras to make political statements, and that has not changed here. What has changed is the sheer amount of screen time that this slaughter occupies. The visceral imagery, though disturbing, is a fantastic contrast to Fanni’s previous superficial lifestyle. The cash that made this lifestyle possible has been destroyed, and we are now witnessing something we expect to remain behind the scenes, but revealed to us in extreme detail. In the absence of wealth, we are able to see the ugliness and the beauty beneath the surface.

This is largely the point I believe the film intends to make. Though I only focused on a few scenes, each image connects directly to the film’s message. Unfortunately, the pace of the film makes this message very hard to enjoy. Overall, it is a wonderful combination of ideals and images that demands quite a large amount of patience from the viewer.

Upcomingdiscs Talks With Robert Davi From Awaken We Are Monster